Karen S. (not her real name) has used Icy Hot Heat Therapy Patches for a long time and says until recently she did not have any problems with them. However, the last time she used a heat therapy patch she suffered burn-like symptoms. Many people who suffered injuries similar to Karen's are now considering a possible lawsuit against the maker of the patch, alleging they were not properly warned about the risks. 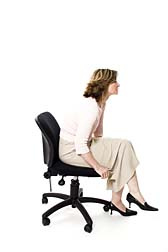 Karen says she has been using heat treatment patches since she was about 15 years old (she is 38 now) to relieve pain caused by a bad back. She has chronic pain associated with ruptured discs and relies on the patches to help when her back is particularly painful. In December 2007, Karen put on an Icy Hot Heat Therapy Patch—it didn't take long for her to realize something was wrong.

"I couldn't put anything on the blisters for the pain. To this day, when certain things rub that area, it just doesn't feel right. I had a doctor look at my back because it felt like there was something sticking into my skin.

"It was painful for at least a month and a half after I used the patch. It hurt to sit and bend and lying on my back was difficult. I have a salon and I sell real estate. It was difficult for me to work and wear clothes that were professional. Even wearing jeans sometimes is painful because of the way the jeans sit--they rub that area on my back."

More News
Karen is like many people who report suffering injuries after using Icy Hot Heat Therapy Patches. Although Chattem, maker of the patch, has claimed that people who are injured used the patch incorrectly, many people say they had the patch on for only a short time before they suffered burn injuries. Some people report losing chunks of skin when the patch was removed, while others say they had painful blisters. Many people say they now have permanent scars where the heat therapy patch was applied.

"I don't think it was labeled that it [the heat therapy patch] could burn your skin like that," Karen says. "It's pretty scary that you can have permanent scars from something you can buy over the counter. I will never ever buy their product line again. I'm scared to death of it."

Although the patches have been recalled, some customers have still been able to purchase the patches at local pharmacies. If you have any unused Icy Hot Heat Therapy Patches, do not use them. People are now investigating a possible lawsuit against Chattem, alleging they were seriously injured by the company's Icy Hot Heat Therapy Patches. If you or someone you love suffered such an injury, you may be eligible to join a lawsuit. Contact a lawyer to discuss your options.

Posted by
Barbara Papiile
on November 12, 2012
After suffering a back injury on July/August 2012 (sorry, I can't remember the exact date as I don't have my paperwork with me), I bought a CVS brand of Icy Hot/Heat Max brand pad for back pain. I purchased the heat pad at 12:30 p.m. and placed it on my back for pain relief. I removed the patch when I arrived home from work at 5:05 p.m. I followed the instructions on the back and only had to patch on for less than 5 hours, far less than the recommended 8 hours per the instructions on the box.

Once I arrived home, I peeled off the patch and was in more excruciating pain, like someone was sticking little needles into my back. I kept screaming to my husband "what's on my back". He stated that the patch removed skin in 2 spots on my back.

I immediately put vitamin E (which usually eliminates any scarring from burns) on the burn as well as some triple antibioltic ointment on the burns. I was still battling the back pain, but now I was also battling with extreme pain that was caused by 2 second degree burns on my back. One right above the other. One, the diameter of a cigar and one the size of a cigarette diameter.

I battled with the pain of these 2 burns for over 3 weeks as it was directly above my waistband. I tried to wear very loose fitting clothing, but several times a day, my clothing or my office chair or during my sleep, would irrate the wounds, and many times the scabs were ripped off my back and my back would begin to bleed. These burns took forever to heal. I thought in fact they were never going to heal. Now I am left with permanent brown scars on my back and that's not where I was even experiencing the back pain.

I had contacted CVS/Caremark to report the incident the next day. They had me mail the remaining product back to them. They issued me a $15.00 gift card for the refund of my purchase, plus any "pain and suffering" their patch had caused me. I exlpained to them that I didn't feel that $15.00 was sufficient for permanent scarring and my pain and suffering.

I am currently negotiating some monetary settlement with their insurance adjuster. I've forever threatened to contact an attorney if they don't render an appropriate monetary settlement. They have already tested the patch and he has been instructed by his client to go ahead and settle my claim.

To date, he's offered me $500.00 to settle this claim. I was really shocked and appalled at their low ball offer. I started researching Heat Max/Icy Hot patch claims and found my situation is identical to every story I have read here. I have informed the claims agent that I at least found 1 lawsuit filed against Heat Max for damages by their products and that I would continue to dig a little deeper into as many similar lawsuits I could find which lead me here.

The claims agent is on vacation, but did leave me a voicemail message that he would like to continue to negotiate a proper settlement with me. I gave him and ultimatum that if he didn't come up substantially with his settlement amount, I would be contacting a lawyer soon, which is something he really does want me to get involved in. The only problem I don't see is any amounts of monetary settlements, including pain and suffering for the permanent scarring, that these lawsuits settled for? He should be getting back to me with an appropriate figure this week, but I just wanted to contact you through this site to see what my options are. I have numerous photos taken through the duration of my burns, and my scarring is still quite visable today.

I would like to hear what my options are and I will appreciate any advice you can give me.