Still more consumers are coming forward with stories of being injured by the Icy Hot Heat Therapy Patch after it was recalled. Many of these people were able to purchase the Icy Hot Patches even after they were recalled because somehow, not all stores have pulled the patches from their shelves. This means that many more people are being burned by a product they should not have been able to buy in the first place. 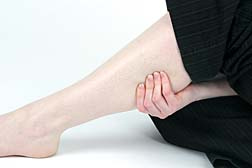 Cynthia A. is one such person. She suffered from serious burns after using the Icy Hot Heat Patch, which she bought after the recall was announced. Cynthia's burns were serious enough that it took over a month for her to heal and she still experiences pain from her injury.

"I had been having muscle cramps in the backs of my legs because of arthritis in my knee. I had tried everything to get rid of these muscle cramps, but nothing worked. So, I went to the store and found the Icy Hot Patches. I put one on my leg. Less than an hour and a half later, I had a burning, tingling feeling where the patch was, so I decided to take it off. The burning felt like a heat burn—like if you've been in front of the fireplace—but it was not really painful yet."

As Cynthia took the patch off, she realized that her skin was coming off along with it. "Oh my god, it took layers off the back of my legs. It felt like someone was tearing my leg apart. I turned around to look at the back of my leg and it was just pouring blood. I got a wet cloth and put it around the edges of where the patch was to stop the skin from tearing. The patch just burned my skin. I had severe pains—I still have pains."

Cynthia went to the doctor to have her injury checked out. She was diagnosed with second and third degree burns on her leg. The doctor gave her some cream to put on the wound and confirmed that the injury was caused by the Icy Hot Patch.

More News
"It was excruciating pain. This happened around March 21 and it took 30 days for the scabs to start coming off. I still have about six or seven scars. What if I had left that patch on for eight hours? I was in pain for over 30 days and I still have shooting pains in the back of my leg.

"I think people need to be really careful before purchasing any type of patch at the store. They need to check the patches often to make sure there are no burns. I really don't think the company got those patches off the market fast enough."