Icy Hot: So Hot, It Hurts

The promise of 'powerful relief at the point of pain' has gone just a little awry for some 200 consumers who report suffering first, second and third-degree burns and a host of other skin irritations from Icy Hot Heat Therapy products.

Chattem Inc., the product manufacturer, has initiated a recall. "Chattem is recalling these products because it has received some consumer reports of first, second, and third-degree burns as well as skin irritation resulting from consumer use or possible misuse of these products," states a Chattem news release posted on the FDA's web site.

Linda Hunter told KLTV News in East Texas that she used the Icy Hot Heat Therapy patch for back pain. "I laid it on the side of my hip and on my leg, and when I removed the patch, it took my skin off." 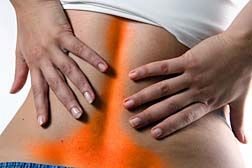 Icy Hot Heat Therapy is a line of disposable patches developed to soothe joint, and muscular pain. They're self-heating, but apparently don't come with an 'off' button.

Product labels warn against using the product while sleeping, on thin, damaged skin or open wounds. Elderly patients more inclined to have such thin skin, or at the very least sensitive skin, are said to be at greater risk of suffering burns.

The label also warns against using Icy Hot Heat Therapy patches for more than eight hours in any 24-hour period.

Still, people are getting burned. According to a spokesperson for the manufacturer, the first wave of reports began arriving in September. In response, Chattem expanded the product labels to include specific instructions for patients 55 years of age and over. Included in the new language was the recommendation that older patients apply the patch to clothing, and not directly onto skin.

More News
According to the manufacturer, the jury is still out as to whether injuries associated with the use of the Icy Hot Heat pain patch is due to product misuse, or a problem with the product.

Until that determination is made, says Chattem, it will keep the product off the market. The recall includes all purchased product, as well as product samples.

It should be noted that on the official web site of the US Food and Drug Administration (FDA), the recall is headlined as URGENT. Consumers using the Icy Hot Heat Therapy patch are advised to discontinue using the product immediately.

Dr. Claire Tibiletti of East Texas has been quoted as suggesting the burns might be a result of the combination of methyl-salicylate, the active ingredient that generates the sensation of warmth, with the adhesive feature of the patches.

That has yet to be confirmed.

If you or a loved one has been burned by this product, please contact a lawyer involved in a possible [Icy Hot Heat Therapy Lawsuit] to review your case at no cost or obligation.
Request Legal Help Now