For most homeowners purchasing a new structure from a builder, home warranty insurance is a must to protect the purchaser from defects in construction or structural integrity not readily apparent when the new owners take occupation. Various home warranty companies vend coverage that kicks in after the initial warranty period from the original builder expires, for additional coverage. Various plaintiffs have sued home warranty companies after various providers exhibited bad faith and reneged on their commitment to the policyholder. 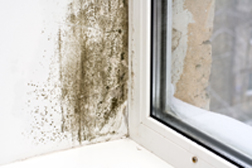 But while many a home warranty lawsuit involves home warranty companies, not all are confined to the extended warranty. In the case of one couple, the target of their litigation was the original builder of their home. At issue was whether or not - as the home’s second owner - the plaintiffs had the right to seek compensation from the builder for structural problems.

In this case, water seepage around windows in the master bedroom.

That made no difference to the Conways, who suspected shoddy construction when they discovered water seeping around the perimeter of their bedroom windows. According to the home warranty lawsuit, the home had been built around 2003 or 2004. The Conways then purchased the home from the original owner in 2006. Two years after that, in 2008, the Conways discovered their water problem.

The Conways filed suit in June 2011 claiming a breach of implied warranty of habitability. Cutler disagreed, saying the warranty extended only to the original owner and not subsequent owners. A judge in the Bucks County Court of Common Pleas sided with Cutler in February 2012.

The Conways appealed to the Pennsylvania Superior Court, and the Court found for the plaintiffs in their decision. In the Court’s view, it was unreasonable to shut out a subsequent owner from the right to go after the builder for alleged defects, given that defects may not be readily apparent until years after the house was first inhabited. The house would have been about two years old when the Conways purchased the home, and four years old when water damage first became apparent in 2008.

Is occupancy subject to interpretation?

However, on appeal to Pennsylvania’s highest court, the lower court’s ruling was overturned. According to the justices of the Pennsylvania Supreme Court, the Superior Court’s reliance on Spivack was misplaced. The Court also held that the interpretation of what comprises a first and second owner according to occupancy as it relates to home warranty insurance eligibility is more of a matter of public policy best left to state legislators.

Justice Seamus P. McCaffery penned the opinion that was released August 18. “We hold that a subsequent purchaser of a previously inhabited residence may not recover contract damages for breach of the builder’s implied warranty of habitability,” the opinion said.

More HOME WARRANTY INSURANCE News
Home warranty insurance continues to be an important aspect of buying and owning a home - especially in the first phases of occupancy when structural defects start becoming apparent. The interpretation of liability on behalf of the builder in this, and similar cases notwithstanding, home warranty companies continue to offer home warranty insurance that kicks in when the builder’s insurance expires, further protecting the occupant - and subsequent occupants (provided they carry an extended warranty as well) from building defects and damage.

Many, but not all policyholders have had their insurance claim denied through an act of bad faith insurance when an insurer has reneged on coverage. Home warranty lawsuits usually follow…

Click to learn more about LawyersandSettlements.com
LawyersandSettlements.com - A trusted, independent legal news provider bringing quality news and information on legal cases and lawsuits filed in the United States of America to its readers since 2002. Over 650,000 legal help requests including Insurance Cases, Business Frauds, and Consumer Frauds have been forwarded to lawyers all across to the country.