A Home Warranty Insurance Story with a Twist 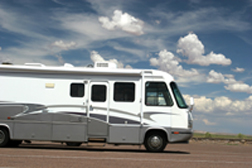 However, flying under the radar are the hundreds of thousands of Americans - perhaps millions - who live in manufactured homes, or those retired Americans who travel the country in a recreational vehicle (RV), essentially living in their motorized home.

What of them? And what happens to them when an insurance claim denied leaves them hanging out to dry?

One woman’s story typifies the sector, and also speaks to the substantial investment some Americans make in their motor homes - an investment that often dwarfs that of a standard piece of real estate.

Virginia Wilson purchased a state-of-the-art Newmar Ventana worth $315,000 after saving her money for two years to come up with the $80,000 down payment. The mobile home, for Wilson, was indeed a mobile home. After purchasing it new, the resident of Naples was living in the full-sized luxury RV as her residence and also used it for transportation. Her goal was to pay off the loan, retire debt free and travel the country in the rig to visit her children.

The parallels to a more traditional home warranty issue, relating to a permanent structure on a building lot, are there nonetheless. A new home is warranted, through companies such as Fidelity National Home Warranty, to be free from manufacturer’s defects that could make the home uninhabitable, for the first year or two of the life of the home. Beyond that period, a homeowner may opt for an extended warranty to afford a longer coverage period against defects. In either case, shoddy workmanship on the part of a contractor, subcontractor or trade is covered, as are inferior materials.

But what of a manufactured home? Millions of Americans live in those. And what of a mobile home? Many use an RV not just for traveling the country during vacation. Some, like Wilson, approach it as a bonefide home on wheels.

At least that was Wilson’s plan, according to The News-Press, but it didn’t work out that way. Shortly after taking delivery of her new $315,000 mobile home, a water leak was discovered through a problem with the plumbing. The dealer from which Wilson purchased the mobile home told her the vehicle would dry out on its own.

However, the situation appeared worse on March 9 of this year when water began to pour into the vehicle, quickly reaching a saturation point. When Wilson took the mobile home back to the dealer, removal of the cabinets revealed water from poorly installed plumbing had been leaching into the unit for months, producing mold. Wood and particle board were found to be rotting. Floor tiles were popping up.

Given that she was living in the unit full-time, Wilson suspects that emerging health symptoms thought to be a sinus infection coupled with severe headaches are, in reality, health issues caused by mold. She had purchased the unit in September of last year, and lived in it for six months before the massive leak occurred and the more serious source and consequences of the water damage were uncovered.

That leaves Wilson battling with the dealer, North Trail RV Center of Fort Meyers, and manufacturer Newmar, for compensation. The troubled motor home, at the time of the report, had been at the dealer for a period of two months. Given that the Newmar motor home was her residence, losing it left Wilson no choice but to temporarily rent an apartment and lease a car.

Wilson said it has ruined her financially. She continues to pay $1,600 per month to maintain and pay down a bank note used to purchase the motor home, and the bank has indicated the loan must be repaid whether Wilson has use of the motor home or not.

In the meantime, according to the report, Wilson has filed complaints with regulators in Florida, hoping to achieve some compensation through the state’s lemon law. She has also filed a complaint with Indiana regulators, the state where Newmar is based. But she may also find herself filing a mobile home warranty lawsuit, as there have been similar cases against Newmar, according to the report. Court records are said to show “dozens” of cases against Newmar alleging defects.

More HOME WARRANTY INSURANCE News
It is not known if Wilson has, indeed, filed a mobile home warranty lawsuit against Newmar or the dealer. With her mobile home warranty insurance company backing out of the situation in deference to it becoming a manufacturer’s warranty issue, Wilson, according to the report, had been trying for two months to either have her money refunded or to be provided with a replacement vehicle, without success. An e-mail from a spokesperson with the manufacturer suggested the matter is between Wilson and Newmar.

“Newmar has and is continuing to work with [Wilson] in getting [warranty issues] resolved in a fair and reasonable manner, and as expediently as circumstances will permit,” said Carl Snyder, identified as representing Newmar Corp in the capacity of “owner relations.”

Home warranty insurance remains an integral part of the process involved with purchasing a new home. Similarly, owners of mobile homes need to be protected against allegedly shoddy workmanship. But because a mobile home is also a vehicle, the lines are sometimes blurred, as plaintiffs filing a mobile home warranty lawsuit have discovered.

Posted by
Greg Marsh, Exposure Scientist
on July 16, 2013
Like all fixed homes, a mobile home's greatest risks to its users are things unseen. Toxins of all kinds, common to such lucrative creations, are very easy for the Scientist to identify and quantify. The resulting analytical date makes litigation very easy - frequently resulting in pre-court settlements. Need more information on these complex situations? See: folensic-pro.com

Click to learn more about LawyersandSettlements.com
LawyersandSettlements.com is an online news and information site for the general public and legal community. As a legal news resource, we have emerged as an independent & trusted voice. We provide detailed and quality information on various lawsuits filed including Insurance Cases, Business Frauds, and Consumer Frauds.