Inmates are people too. And they get sick; with a sizeable number infected with hepatitis C. Prison populations are among the most infected, requiring treatment. However, the problems many plaintiffs are having with the inability to access the effective but expensive Harvoni drug are also being felt by those in the penal system. To that end, the Wall Street Journal (WSJ 6/11/15) reports that two inmates have launched a Gilead Hep C Denied Insurance Claim Lawsuit. 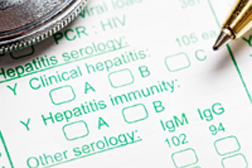 Defendants in the proposed class action are Carol Higgins O’Brien, identified as the commissioner of the Massachusetts Department of Correction, and the Massachusetts Partnership for Correctional Healthcare. The latter is a contracted provider of healthcare services for state prisons. The plaintiffs in the Harvoni lawsuit are Emillan Paszko and Jeffrey Fowler.

“Prisoners who ought to receive the new medications are not receiving them, and a vast number of prisoners with Hepatitis C are not being afforded the necessary testing to determine whether they too should receive treatment,” according to the lawsuit, which was filed in federal court in Boston.

The lawsuit is among several Harvoni Denied Insurance Claim Lawsuits emerging over an issue that is as compelling as it is sad. Harvoni and a slightly older companion drug known as Sovaldi - both developed by Gilead Sciences - are highly regarded in the medical community as being the most effective drugs yet in the fight against hepatitis C. The expense, however, is proving to be prohibitive and many healthcare plans and insurers are balking at the cost, delaying approval of treatment or even refusing treatment altogether.

Most insurance providers have a contractual authority to opt for a lesser-expensive alternative provided the alternative is similar - such as a generic - to the prescribed treatment. However, Sovaldi and Harvoni are in a class by themselves. Doctors who prescribe Sovaldi or Harvoni do so given a belief that no other treatment option would be effective.

Prison systems historically have a high rate of infection. The Harvoni lawsuit takes the prison commissioner and health contractor to task for failure to update their treatment protocols given the availability of new and effective drugs.

More HARVONI DENIED CLAIM News
“Defendants have not changed their protocol to recognize the new reality in Hepatitis C treatment, and they have done nothing to conduct the necessary pre-treatment testing of the many prisoners - the nonresponders, relapsers, and treatment-naïve - who may benefit from treatment now or in the future,” the lawsuit states.

The two plaintiffs are reported to be quite ill. Paszko, who is located at Shirley, Massachusetts, has serious complications from hep C. His co-plaintiff, situated in a different facility, was reportedly treated with older drugs last year, but the treatment proved unsuccessful.

A federal judge has been petitioned to certify the Harvoni lawsuit as a class action. The case is Paszko et al v. O’Brien et al, Case No. 1:15-cv-12298-NMG, in US District Court, District of Massachusetts.

If you or a loved one have suffered losses in this case, please click the link below and your complaint will be sent to an insurance lawyer who may evaluate your Harvoni Denied Claim claim at no cost or obligation.
Request Legal Help Now

Posted by
betty
on November 25, 2015
WTF is United Healthcare doing with the premiums paid by the consumers!!!!!!!!!!!!!???????????????? Where the hell is the Harvoni you fools??
Posted by
Susan Vignes
on September 9, 2015
I would like to comment on this. I was recently denied the medication Harvoni. I filed a grievance with Anthem Blue Cross and was denied again. I filed a complaint with the Independent Medical Review Board and they overturned the denial from Anthem and I received my medicine. In the reports from the 3 doctors that reviewed my case, 3 out of 3 doctors stated that they felt that every person infected with this virus should be treated no matter what the stage of the disease. I was told that it was not "medically necessary" for them to approve this medicine. Stopping the progression of liver damage by eradicating this infection with this wonderful medication is exactly what everybody should be receiving. I am telling everybody that you cannot take no for an answer. There is a website: mypatientrights.com that is a wonderful site with great information. They published my story. It is the first story that you see when you access the site. It is titled: Patient denied medication for chronic infection. It includes the name Susan V. (that's me) Please do not give up...your life is worth fighting for.
Posted by
micheal
on September 7, 2015
TOTAL CURE FOR HEPATITIS WITH CANNABIS OIL
I’m a living proof that Hep C can be cured with Cannabis oil.In 1998 while donating blood I found out I had Hep C.I was told there was no cure back then. I was told to quit drinking alcohol ASAP or would kill me within 10 yrs so I quit drinking,and in 2014 i started to using cannabis oils sent to me by a specialist,I applied it everyday & was told after few months that I was Hep-C free,I asked my specialist if the oil was so fast in treatment & he replied,” If you took care of your liver by not drinking & have not being smoking pot instead then he said it’s quit possible that cannabis oil cure fast” because I never went for any treatment,I was told it cost $20,000+ for the treatments, believe me this gilead company are sick MF'ers, the drug by this same company in vietnam is $900, the cost for this drug in the USA is $84,000. It is a supreme example of the fleecing of America by these scumbag lower than life corrupts pieces of sh*t. hail to one that,you can contact the specialist that helped me get cure am sure he will receive you request to help,several people have been cured for quite awhile now wish i helped introduced in my hepatitis organization online. while this is great for us there is nothing really new here to read about,so people,don’t discriminate,educate so more people have a chance of curing this deadly disease that killed my dad.R.I.P Dad! just help me pass this information on to anyone out there who is struggling to have a cure,lets save the poor once who have disease and cant afford to pay for the madications
Posted by
GARY BALLARD
on September 4, 2015
INSURANCE refusing to fulfil obligation for treatment. HEP C.. UNITED HEALTH CARE.....

Posted by
GARY BALLARD
on September 4, 2015
USA consumers being robbed. MORE lawsuits coming......UNITED HEALTH CARE a major player in these deaths due to refusual to supply the meds..
GILEAD and others