In what can only be described as a damning revelation, one of the world’s largest automotive manufacturers at the center of an ignition switch controversy is alleged to have quietly ordered a massive quantity of ignition switch parts without submitting filings to the National Highway Traffic Safety Administration (NHTSA). The order, totaling 500,000 switches and worth $2.7 million, was put through about two months before General Motors (GM) notified federal regulators and the general public about GM faulty ignition switches. 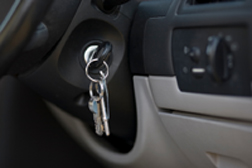 According to the New York Times (11/10/14), this new information has been obtained through the discovery process tied to multidistrict litigation (In re: General Motors LLC Ignition Switch Litigation, case number 1:14-mc-02543, in the US District Court for the Southern District of New York). Electronic mail communication between GM and one of its primary parts suppliers, Delphi Automotive, has recently been unsealed.

The faulty switches are alleged to have a defective mechanism that fails to properly keep the switch engaged if the switch is jostled in any way while the vehicle is in motion. As an example, drivers commonly keep numerous keys - along with their ignition keys - on a key ring, which itself may feature a heavy medallion or other feature. This weight, together with the motion of the vehicle, is alleged to have caused the ignition switch to suddenly disengage without warning, shutting down the engine and all hydraulic systems, such as power steering and power brakes - not to mention cutting power to airbags.

GM has said that simply using the ignition key alone provides a safe environment for vehicle operation without risk for the ignition switch moving to “Accessory” mode. However, for most Americans, a key ring free of other keys is hardly realistic.

It is alleged that at least 32 deaths have been caused by the faulty switches, together with innumerable injuries.

What did GM know, and when? Released e-mails are revealing…

The unsealed documents reveal that GM held an internal committee meeting to discuss the ignition switch issue on December 17, 2013. The meeting is alleged to have adjourned without any decision or action suggesting a recall. The next day, December 18, an e-mail from a GM employee was issued to Delphi asking for a half-million replacement parts for ignition switches. The request was characterized as “an urgent field action for our customers.”

According to the report, the sharp increase in the parts order to Delphi appeared abrupt - not to mention its size, comprised of a request for 500,000 switches identified as an immediate need, and a purchase valued at $2.6 million. According to various documents, Delphi had shipped some 11,450 switches to GM between December 2012 and December 2013. Suddenly, GM requests an “immediate” shipment of 500,000 switches. When Delphi, on the following day, sought to confirm the huge order, documents show that the employee who placed the initial order on GM’s behalf responded on December 19, 2013 that the parts were required for a field action involving more than 700,000 vehicles, including Cobalt vehicles in the 2005 through 2007 model years.

“Yes, it is a huge increase,” wrote Sarah Missentzis, identified as a GM contractor who forwarded the original request on the automaker’s behalf. The subject line of the e-mail is reported to include the words “Field Action **Urgent**.” As part of her response to Delphi’s query as to the size and the urgency of the order, Missentzis is said to have added, “I would need to start seeing shipments ASAP.”

The report noted that it wasn’t until January 31 of this year that an internal committee at GM decided to issue a recall of vehicles built with the problematic switches. That recall encompassed some 2.6 million vehicles.

More FAULTY IGNITION News
The report notes that Mary T. Barra, at the time the incoming President of GM, was serving as President and CEO when the recall was given the green light internally at the end of January - her first month at the helm - but that she was not in that role when GM issued the urgent request to Delphi for parts the previous month. Barra was apparently serving as an executive vice president with responsibility for purchasing and the supply chain, according to the report, citing as a source Barra’s official bio on the GM website.

Barra has said she did not learn of the ignition switch defect until the internal GM committee met to discuss the problem, and the subsequent decision to implement a recall, at the end of January.

The GM faulty ignition switch MDL currently has about 100 lawsuits. Attorneys hope to bring the first bellwether cases to trial by January 2016.

If you or a loved one have suffered losses in this case, please click the link below and your complaint will be sent to a defective products lawyer who may evaluate your Faulty Ignition claim at no cost or obligation.
Request Legal Help Now