FRS Energy Drink Versus an Apple

The makers of FRS healthy energy drinks and other FRS energy brand of products advertise that they contain quercetin, a plant-based chemical found mainly in apples. But health experts and savvy consumers know that old adage—an apple a day keeps the doctor away—rings true, but not for an FRS energy drink. 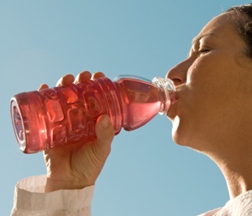 An energy drink, although it contains quercetin, is mostly flavored water, or "food with calories," according to the FDA. And add caffeine, which is typically the ingredient that gives you the boost of energy. (Granted, FRS drinks have less caffeine than other popular energy drinks, but a cup of coffee may produce the same effect, and it's a lot less expensive.)

According to Mintel, a market research company, consumers are increasingly skeptical about energy drinks, and they aren't buying into marketing schemes such as the FRS offer of a "free trial." This marketing ploy means that you get some product delivered to your door, but then you have 14 days to contact the FRS company to cancel an ongoing product-buying cycle. A number of customers are ranting and raving online after they have been automatically charged about $65 for a shipment of FRS products. The energy drink marketing industry has to come up with these so-called free trials and other gimmicks simply to stay in business.

As for healthy benefits, you'd have to be quite gullible to believe that FRS healthy energy drinks can replace an apple or a handful of grapes, which also contains fiber—a vital dietary ingredient lacking in energy drinks. "There is a significant market right now for drinks offering a boost of energy," said Lynn Dornblaser, Mintel global new products expert. "Although consumers say they try to eat and drink better, it appears that energy drinks are not a category in which that happens, as they continue to choose options that contain sugar, caffeine and taurine, all of which can have negative effects if consumed in excess."

Concerns over product safety, lack of universal appeal and a fragile economy, combined with worries about consuming too much sugar or caffeine, have caused sales to decline. Mintel has found that the majority of adult consumers are not interested in energy drinks—so FRS mainly targets the athletic, young and male demographic.

More FRS HEALTHY ENERGY News
Meanwhile, the Food and Drug Administration (FDA) has cracked down on misleading label claims and the food industry fears that the Federal Trade Commission (FTC) might get tough on advertisements in the food supplements sector, which includes energy drinks.

Currently, food supplements lack regulation and companies such as FRS are banking on that. At the same time, there is limited evidence to suggest that consumption of energy drinks can improve physical and mental performance. Some improvement has been noted, however it is not known whether it is due to caffeine, other herbal ingredients or as a result of the combination of the ingredients found in the beverage.

So why bother? As for convenience, everyone has time to eat an apple. And at approximately one-tenth of the cost.

Posted by
Zen
on July 29, 2013
Ernestina Gama makes a good point. What if you cannot eat an apple? What if you have no teeth? Then FRS seems like the viable option to go with. Anyone that has actually tried FRS will tell you that it isn't anything like Monster, Red Bull, or Rockstar Energy Drink. It is much more mild and on par with their claims that it is healthy energy. It seems odd that a site like this would try to crack down a product that has very little risk at harming anyone. There is no taurine in the FRS products and it carries very little amounts of caffeine and sugar. It even carries a low calorie version with only 2g of sugar. While I would argue that this low calorie version is problematic due to people with sucralose allergies, then you would have to go after all the makers of diet and low calorie drinks (Diet Coke, Diet Pepsi, etc.) I've used FRS before and during workouts and I have seen it consistently boost my performance and energy levels. I am lifting weights at levels I have never done previously. That is why I am a firm believer in the product and the
Posted by
ERNESTINA GAMA
on November 18, 2010
Was rather amused regardin FRS Healthy Energy drinks. EAT AN APPLE A DAY WHAT ABOUT INDIVIDUALS THAT WOULD FALL IN MY CATEGORY, A CANCER SURVIVOR WITH SEVERE FATIGUE AS A RESULT OF NO THRYOID GLAND AND OTHER FACTORS SUCH PRESCRIBED MEDICATION OVER THE YEARS AND AS A RESULT I AM LOSIG MY TEETH AND THEY ARE LITERALLY FALLING APART PIECE BY PIECE THEREFORE I CANNT CHEW AN APPLE AN DAY.
JUST A COMMENT.
(AND TO POOR TO AFFORD DENTAL CARE)