In light of the recent offer by Merck to settle Fosamax lawsuits regarding osteonecrosis of the jaw (ONJ), Jean is hopeful that her Fosamax fracture claim will reach a settlement soon. 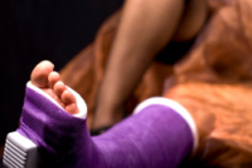 “I only took Fosamax for a few years after being diagnosed with osteoporosis,” says Jean. “About a year after taking it, I suffered multiple breaks. The first was my big toe - I tripped on a piece of wood and I don’t think it would have broken normally.

“Then I had four more breaks, all spontaneous. One break happened when I was in a store trying on a pair of shoes and my ankle twisted slightly but the pain didn’t go away. I had an MRI, and sure enough, it was a break. Then I broke my tibia and fibula. These breaks all happened within the past few years; it just seems too coincidental.”

Jean took herself off Fosamax about one year ago and says she hasn’t had any fractures since. “I am a bit of a klutz, sometimes I run too fast and I’m always bumping into things, but I never had any breaks or fractures in all my 65 years,” she says.

Jean also lost her job due to the Fosamax fractures. She was working in a nursing home hobbling around on a walking cast but it was very difficult limping around so they let her go.

More FOSAMAX News
“I heard about the Fosamax class action on TV, put two and two together and stopped taking it,” Jean says. “OMG I was really mad; these breaks had to be associated with Fosamax. I told my prescribing doctor and she said she heard something about it but didn’t think it was that serious. Well she is wrong. My osteoporosis is worse but I don’t have any broken bones and I am on calcium supplements. And I am hopeful that I will be included in the Fosamax class action.”

In December 2013, Merck offered to settle almost 1,200 Fosamax ONJ cases, as long as all of the outstanding ONJ claimants agree to the $27.7 million settlement. Claimants have until January 13 to notify their intent to participate in the settlement process and until March 31 to opt out of the settlement. A spokesperson for Merck said the drug manufacturer has until May 15 to decide whether it will go forward with the agreement.

This settlement does not include more than 4,000 Fosamax femur fracture lawsuits filed in both state and federal courts. Settlement talks claiming Fosamax caused femur fractures were stalled after Merck won five out of seven bellwether osteonecrosis trials.