According to the American Association of Oral and Maxillofacial Surgeons (the surgical sector of dentistry), there may be "serious underreporting" of Bisphosphonate-Related Osteonecrosis of the Jaw (BRONJ) from Merck, the manufacturer of Fosamax. 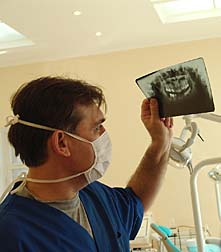 About 10 million men and women are prescribed Fosamax and with top annual sales of $3 billion, no wonder Merck might want to keep the lid on the risks involved; so much so that a class action lawsuit filed in April, 2006 claimed that Merck knew about the risk and hid it from the public.

The AAMOS also notes that over 190 million oral bisphosphonate prescriptions have been dispensed worldwide.

Fosamax is supposed to help increase bone density and it is mostly prescribed to menopausal women suffering from osteoporosis. But in the jawbone, this drug does the reverse and actually destroys bone.

More News
The American Association of Oral and Maxillofacial Surgeons (AAMOS) considers patients to be at risk of BRONJ if they have used a bisphosphanate (bis FOS fo nayt) such as Fosamax, if they have bone death (a condition that results from poor blood supply to an area and in this case, the jaw) and there has been no history of radiation therapy to the jaw.

In 2003, oral surgeons recognized and reported cases of jaw bone death in patients treated with IV bisphosphonates. Since these reports, several cases have been reported. Novartis, another manufacturer of the IV bisphosphonates, notified healthcare professionals of additions to the labelling of these products, including a risk of developing osteonecrosis of the jaws. In 2005, a broader drug warning of this serious side effect was issued for all bisphosphonates, including the oral preparations. Fosamax is included in this group of medicines.

Although jaw bone death is uncommon, it is a terrifying side effect and difficult to treat. Many patients taking Fosmax have no idea that problems with their jaw could be linked to this drug.

If you or a loved one has suffered from ONJ after taking Fosamax, please contact a lawyer involved in a possible [Fosamax Lawsuit] who will review your case at no cost or obligation.
Request Legal Help Now