A case of foodborne illness that has sickened 184 people nationwide since July was traced to salami sold by Daniele Inc., a Pascoag, Rhode Island-based manufacturer. Daniele has announced a recall of its pepper-coated salami and variety packs containing peppered salami. 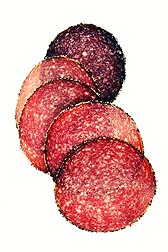 Eight cases in Oregon and 14 in Washington have been reported so far, said William Keene, senior epidemiologist for Oregon's Public Health Division.

"This is a weird outbreak in a lot of ways, because it's been such a long investigation," Keene told the Oregonian on January 24. "We've gone down a lot of dead ends until the puzzle pieces started to fit together."

The salami was sold online as well as in grocery and big-box stores, including at Sam's Club, Wal-Mart and on Amazon.com. Most was sold under the Daniele brand, but several recalled items appear under the Boar's Head, Black Bear and Dietz & Watson labels. All of the products have a USDA mark that says "EST. 54" or "EST 9992."

No deaths have been reported, but the Centers for Disease Control and Prevention (CDC) in Atlanta announced that 38 states have reported cases of salmonella poisoning, most recently at the beginning of January. A total of 35 people were hospitalized.

A spokesman for Daniele, Jason Maloni, indicated that the recall was conducted "because our pepper-coated salami is one of the commonalities of people who've become sick. We're recalling far more product than necessary."

More FOODBORNE ILLNESS News
He added that scientists have yet to prove that the salami actually caused the outbreak.

However, Keene said that a lab in Seattle produced positive tests for salmonella in recent days on Daniele salami purchased from a Costco in Washington.

Some in the scientific community have speculated that the pepper on the salami caused the outbreak, not the actual meat itself. "The company doesn't test or process the pepper that they buy," said Keene. "That doesn't mean that they're bad people, but it may have slipped through their quality assurance program."

A spokesperson for the manufacturer said Daniele plans to start irradiating its pepper, which would kill salmonella and any other harmful bacteria that could lead to foodborne illness. The particular strain of salmonella involved is known as Montevideo, a relatively common strain.