More FOODBORNE ILLNESS News
California health officials are linking a recent outbreak of what is believed to be salmonella food poisoning to the Margarita Mix-Off event recently held in Chico on May 8. 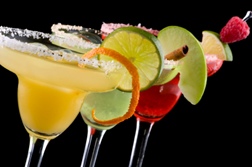 At least fifteen of the hundreds of guests showed symptoms of the foodborne illness, and three were later hospitalized for their sickness. The discovery puts to an end a weeks-old investigation seeking to find the culprit, though a precise food item has yet to be established as the cause of the problem.

Officials say it could be impossible to pinpoint who was at fault in the outbreak, as more than six local restaurants catered the event with numerous selections from their own menus.

Initially the outbreak had been linked to a recent crop of alfalfa sprouts which were found to be contaminated with Salmonella bacteria, though lab results revealed that the two cases were unrelated.

Salmonella food poisoning can cause a number of debilitating symptoms that can last up to seven days, including vomiting, diarrhea, fever and abdominal cramps.

If you or a loved one have suffered losses in this case, please click the link below and your complaint will be sent to a drugs & medical lawyer who may evaluate your Foodborne Illness claim at no cost or obligation.
Request Legal Help Now