Apple slices that were introduced as a healthier addition to the iconic 'Happy Meal' for children at McDonald's could be contaminated with Listeria and are part of a food recall aimed at preventing a possible outbreak of food poisoning. The recalled product, which was shipped to numerous other retailers and food suppliers, reportedly could affect consumers in 36 states. 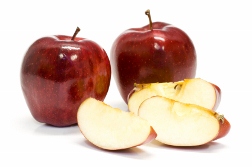 CBS News (8/13/12) reported that Missa Bay LLC, a subsidiary of Ready Pac Foods Inc. of Swedesboro, New Jersey found traces of Listeria on equipment used to produce the recalled apple products that have a best-before date extending to August 20th—thus as of today they could still be in circulation and still potentially consumed, leaving the consumer with a risk for contracting a foodborne illness.

Amongst the products included in the voluntary recall, according to CBS News, were 1.2-ounce packages of apple slices with a 'McDonald's' label that were sold only in Connecticut, Massachusetts, Maine, New Hampshire, New Jersey, New York, Pennsylvania, Rhode Island and Vermont on or before August 19, and McDonald's 5.75-ounce fruit and walnut snacks sold on or before August 20.

Burger King, another fast food giant, is also caught up in the recall to prevent food poisoning. Burger King's 2-ounce fresh apple slices sold on or before August 30 are included in the recall.

Missa Bay LLC announced the voluntary recall on August 10. The products that have a potential to cause food poisoning include 293,488 cases and 296,224 individual units of products shipped to no fewer than 36 states and the District of Columbia, according to CBS News and the Associated Press (AP).

Packaged fruit, vegetables, salads and sandwiches containing apples and distributed to Wawa convenience store and Wegman's grocery chains were included in the foodborne illness recall involving possible Listeria contamination. Various apple and fruit snacks with 'Ready Pac' labels and apple salad kits with a 'Safeway Farms' label are a part of the recall.

More FOODBORNE ILLNESS News
McDonald's, while previously offering kids and their parents healthier alternatives in Happy Meals, last year made the move to include fresh apple slices as a regular part of the venerable Happy Meal in response to a greater demand for healthier foods.

As a source for food poisoning, Listeria can be extremely serious for children, pregnant women, the elderly and those with weakened or compromised immune systems. CBS / AP reports that a listeriosis outbreak involving cantaloupes last year sickened 146 people in 28 states. There were 30 deaths reported, with one woman reporting a miscarriage while she was sick with food poisoning.

Missa Bay LLC is hoping to avoid such a disaster. So far there have been no reports of illness. However, foodborne illness outbreaks such as the cantaloupe outbreak of a year ago can often lead to calls to a food poisoning lawyer.

Posted by
crystal
on August 23, 2012
6 days ago I had went to McDonald and had eaten some of them little apples in the pack and I notice after that I got sick and got the diarrhea headache just not feeling good at all so people stay away from them apples