Food recalls, undertaken in an effort to avoid cases of Foodborne Illness, can appear to take on a life of their own after the domino effect of a recall takes hold. Case in point is the recent recall of more than a million hard-cooked eggs by Michael Foods. 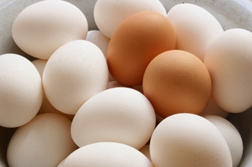 The initial recall, in an effort to avoid any potential for Food Poisoning, was initially announced January 26, according to Food Safety News (2/2/12) and various other media outlets, including CBS News. The US Food and Drug Administration (FDA) was also a part of the process that saw the hard-cooked eggs recalled in no fewer than 34 states due to a concern over a potential for listeria poisoning.

CBS News reported on February 3 that listeriosis could cause severe symptoms in older adults, women who are pregnant or individuals with weakened immune systems. Symptoms run the gamut from headache and fever to diarrhea and convulsions. Recent foodborne illness outbreaks included last year's listeria outbreak that affected 146 people in 28 states, after consumers became ill from ingesting infected cantaloupes.

The FDA noted that Listeria monocytogenes can be very serious and can sometimes prove fatal in young children or older adults.

The hard-cooked eggs, representing three lots and packed in pails with brine, were sold for institutional use. What that means is that the affected products, amounting to about a million eggs and 15,000 pails in total, were not vended directly to the consumer, but rather were sold to food manufacturers and distributors. In turn, according to an FDA press release (2/1/12), the affected products could have been used as ingredients in manufactured products sold to retail outlets that would have direct access to the consumer.

The possibility that Foodborne Illness could constitute a larger net than just the recalled eggs did, indeed, result in a widened recall about five days later. According to Food Safety News, a number of retailers announced recalls of product sold directly to the consumer that might have been manufactured with the problematic eggs.

Those recalls included the following lots of potato salad from four retailers:

18th Street Deli of Hamtramck, Michigan, earlier recalled about 118 pounds of julienne salad products that include turkey, ham and hard-cooked eggs distributed to retail stores in Michigan and vending companies in Indiana, Michigan and Ohio.

The eggs themselves, which could potentially result in food poisoning if consumed as part of a manufactured product like potato salad, were packed in 10- and 25-pound pails and sold to distributors under the brand names Columbia Valley Farms, GFS, Glenview Farms, Papetti's, Silverbrook and Wholesome Farms.

More FOODBORNE ILLNESS News
The initial recall was announced January 26 and widened February 1. Michael Foods indicated that third-party lab testing confirmed the presence of listeria contamination in some of its product. The source of the contamination, Michael Foods suggested, was a repair project at its packaging facility in Wakefield, Nebraska.

While there have been no foodborne illness cases stemming from this recall, health advocates say it could be too early to tell: CBS News reported on February 3 that symptoms stemming from listeria exposure can take two months to emerge. Thus, it would not be unreasonable to assume that reports of Foodborne Illness could emerge before the month is out.

Foodborne illness outbreaks often result in a Food Poisoning lawsuit brought by plaintiffs whose health has been adversely affected, impacting such things as job performance and income, and the livelihood of a family.