More FOODBORNE ILLNESS News
Five Muslim soldiers who were recently removed from active duty at South Carolina's Fort Jackson over allegations of a food poisoning plot have been cleared of suspicion in the case, according to US Representative Joe Wilson. 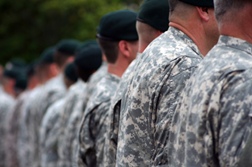 The allegations stem from a series of verbal threats the soldiers in question allegedly posed in December 2009. The five men, Arabic translators participating in the military's Lima 09 program, have been cleared of all suspicion of malicious poisoning.

"The initial investigation confirmed that [the five soldiers] had not made any effort to poison food and that allegations about their disloyalty were inaccurate," Representative Wilson told the McClatchy Newspapers. "There was further investigation. I have not received any word of it being over. I think they would tell me."

ABC News is reporting that four of the soldiers were discharged from the service for petty crimes, and the fifth returned to his National Guard Unit in Virginia. Army officials have declared that there is no immediate threat to the base's food supply, but the soldier's laptops have been seized for analysis.