In an ironic twist of fate, food packets meant to help, and comfort victims of natural disasters may wind up making them sick, after it was discovered that relief packets distributed by FEMA may contain peanut butter salmonella linked to the current outbreak. 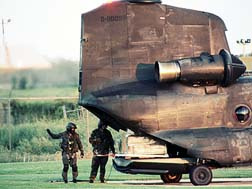 The Federal Emergency Management Agency (FEMA) made the announcement Wednesday that food kits distributed to disaster victims in Kentucky and Arkansas may contain the problematic peanut butter associated with a salmonella outbreak that is linked to 8 deaths and sickened more than 500 across 43 states.

The FEMA food packets were sent into Kentucky and Arkansas as part of federal relief efforts after the areas were devastated by ice, rain and snow last week. Power lines were brought down and some have been without power for a week. Images have flooded the TV airwaves of Americans huddling in their homes under blankets, and extension cords snaking across the floor connecting gas-powered generators to vital appliances such as refrigerators, and tiny space heaters.

Those without generators are left virtually in the dark and the cold. Thousands are in shelters. President Obama declared the states a disaster area, which allowed for federal aid—including food—to flood in.

"Commercial meal kits manufactured by Red Cloud Food Services Inc., under the Standing Rock label, have been provided to disaster survivors in impacted communities, and these kits may contain peanut butter which is part of the precautionary national recall underway in accordance with the U.S. Food and Drug Administration (FDA)," FEMA said in a written statement.

"People who have received commercial meal kits are asked to inspect the kits in their possession and immediately dispose of any peanut butter packets."

Tragically, this comfort food may cause people who are already suffering hardship, to become extremely ill with peanut butter salmonella poisoning.

The latest outbreak has its roots in a manufacturing plant, now closed, located in Blakely, Georgia. Owned by Peanut Corporation of America (PCA), the facility has been found to be wanting in terms of cleanliness and other related issues—not to mention allegations that salmonella had been found in PCA product as far back as 2007, but that the company allegedly indulged in 'lab-shopping,' shipping product suspected of containing salmonella around to different labs until a negative test result was achieved.

Last month all product made at the facility in 2007 and 2008 was recalled. That's a tall order, given that PCA provides large-volume peanut butter to institutions and food services, and peanut paste used in the manufacture of hundreds of products distributed by more than 100 other companies.

In a related move, the Federal Agriculture Department yesterday announced a ban against PCA for a period of one year. US Agriculture Secretary Tom Vilsack removed PCA's chief executive from his seat on a baord that advises the government on peanut quality standards.

Peanut butter sold in jars, at retail, is considered safe. However, such is the reach of PCA into the manufactured product markets that consumers were advised to throw out anything that may contain nuts or peanut paste product used for its manufacture. This week it was announced that a small, niche dairy and maker of ice cream north of Toronto in cottage country, had recalled its 'Heavenly Hash' ice cream as a precaution.

"Independent audit and food safety firms also conducted customary unannounced inspections of the Blakely facility in 2008," it said. "One gave the plant an overall 'superior' rating, and the other rated the plant as 'Meet or Exceeds audit expectations (Acceptable-Excellent)' ratings. Unfortunately, due to the nature of the ongoing investigations, we will not be able to comment further about the facts related to this matter at this time."

More Food Supplements News
Inspectors with the FDA had reported finding mold on the walls and ceiling, and a breach in the roof. A criminal investigation has been launched, not to mention Congressional pressure to reform the FDA and make it more effective.

It is felt by many that a more effective, and accountable federal regulator would help stem future outbreaks, and may have prevented past problems with everything from hamburger, to pizza.

But when it comes to peanut butter, you're talking the heartland of America. Peanut butter is, well…peanut butter. And with a dashing young President now in the White House with two young children—one of whom eats peanut butter—one can rest assured change is coming.

However, change comes too late for those who have already died, or have become sickened by peanut butter salmonella. Lawsuits are in the works, and your's may be next in line…