Canada's Maple Leaf Foods, which was hit with a major outbreak of Listeriosis last year that was linked to the deaths of as many as 22 people, this morning recalled a series of wiener products for the potential presence of deadly listeria bacteria--another foodborne illness. 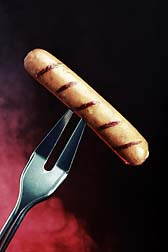 According to a Reuter's report this morning the company says that the recall was being carried out as a precaution. "After last August's tragedy, Maple Leaf is being ultra cautious about listeria," Dr. Randall Huffman, chief food safety officer for Maple Leaf Foods, said in a statement.

A nationwide outbreak of listeriosis food poisoning last year in Canada has been linked to several deaths. Maple Leaf Foods took full responsibility for the outbreak and agreed in December to settle a series of class-action lawsuits related to the outbreak. The settlements cost the company Can. $25 million and the outbreak served as a blow to the company's reputation for food quality.

As the result of last year's listeriosis scare the Canadian government developed a new listeria policy. Maple Leaf Foods said that it was in compliance with the updated policy. In a separate statement the Canadian Food Inspection Agency (CFIA) warned the public not to consume the products that were being recalled.

More Food Poisoning News
The best-before dates on the recalled products range from September 8 to September 17. The dates, the number for the Hamilton plant "EST. 611" and Line 1 "L1" are on an inkjet stamp located on the edge of the packaging.

The company stressed there has been no reports of illnesses related to consumption of the recalled products. Dr. Huffman said in comments published in the Globe and Mail this morning from the Canadian Press that the Hamilton plant utilizes a strong food safety testing and sanitation program and that the listeria bacteria discovered in random samples were found to be at very low levels.

Reuters was reporting this morning that last year's listeriosis outbreak was linked to 15 people, but the Canadian Press this morning puts that figure at 22. The outbreak occurred in the summer of 2008 and affected people across Canada.

Maple Leaf Foods says it is in the process of removing the affected wieners from inventory and store shelves.