A transgender teen applying for a job at a McDonalds in Orlando has lodged a formal complaint against the fast food chain claiming the restaurant violated Florida employment law by refusing to hire the plaintiff over gender issues. 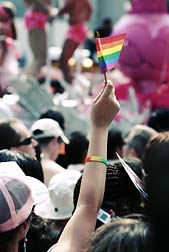 In July, Zikeria Bellamy filled out an online application for a position as a shift manager or crew leader at a nearby McDonalds, leaving the box indicating the applicant's gender unchecked. The gender question is listed as optional on the online form.

More FLORIDA EMPLOYMENT LAW News
However, when interviewed in person, the manager on-staff insisted that Bellamy select a gender on the application. When Bellamy selected male, the manager abruptly ended the interview. A second attempt to contact managers resulted in a second rebuke and a profane voicemail in which the McDonalds manager referred to Bellamy with a homophobic slur.

The manager has since been fired.

The Transgender Legal Defense and Education Fund have taken up Bellamy's defense, filing an official complaint with the State's Commission on Human Relations that claims McDonalds has violated the Florida Civil Rights Act.

Under the act, employers are prohibited from discriminating against an applicant based on their race, ethnicity and gender. Transgendered individuals have been covered by sex and disability provisions within the act in past instances.

If you or a loved one have suffered losses in this case, please click the link below and your complaint will be sent to a civil & human rights lawyer who may evaluate your Florida Employment Law claim at no cost or obligation.
Request Legal Help Now

Click to learn more about LawyersandSettlements.com
LawyersandSettlements.com is an online news and information site for the general public and legal community. As a legal news resource, we have emerged as an independent & trusted voice. We provide detailed and quality information on various lawsuits filed including Civil & Human Rights Cases, Discrimination Cases, and Employment Law Cases.