Demetrius was a cook in a nursing home until last month. “I couldn’t get to work because I was stuck in an ice storm so I was fired for missing one day,” says Demetrius. “I believe I was wrongfully terminated and my employer violated the Florida labor law.” 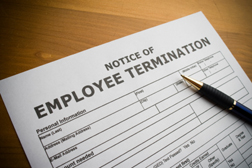 Demetrius worked the 4 am-1 pm shift and had never been late for work, until inclement weather conditions forced him, and thousands upon thousands of other residents, to stay home from work.

“For two days the whole county was iced over and we had a state of emergency,” says Demetrius. “We were told not to drive: roads were blocked in my neighborhood and power lines were down. I phoned work and said that I couldn’t even get out of my driveway.”

Demetrius’s supervisor told him that was his problem! Not only that - he wasn’t “allowed to call in” to take time off. So he tried his best.

“I couldn’t get my truck started - Florida vehicles aren’t meant to be driven in freezing weather,” he says, “and then the power at home went down; my neighborhood was pitch black. Even if I did make it to work later that day, no matter how early I left, the road down the street from my house was closed by the county. There was no way I could make it.”

(At the end of January 2014, Escambia County declared a State of Emergency until midnight Thursday. The County closed all offices Wednesday and Thursday with only essential personnel reporting to Emergency Operations Center. Travel was not recommended due to ice accumulations on roadways throughout the County.)

Demetrius got to work safely on the third day, right after the state of emergency was lifted. “I started my shift at 4 am, and at 4:45, my manager came into the kitchen and told me I was suspended indefinitely - I no longer had a job because I didn’t show up yesterday,” he says. “I worked at this nursing home for five months and never had a complaint; I was never even five minutes late.”

He also worked above and beyond the call of duty. Demetrius often cooked at special events without getting overtime compensation. For instance, on a few occasions the nursing home administrator asked him to cook at the local church when they were promoting and marketing the home. A few times he needed certain seasonings and purchased them on his own dime and his own time - he never asked for anything.

“And there were many days when I never took breaks, not even lunch breaks,” he adds.

More FLORIDA EMPLOYMENT LAW News
At the end of the day, around 12:45, I would sometimes take a 15-minute break. If I did take a break, someone else would have to do my job so I just kept working as a nice gesture. I thought that I would be treated fairly in return. But I missed one day of work and this is what happens to me.”

Being nice sometimes doesn’t pay off, but Demetrius is confident that the Florida labor board will look into these labor law violations. If not, he has already filed a claim with an employment law attorney in Florida.

“Being treated like this makes you feel like it’s not worthwhile to be kind or go out of your way to help people,” he says. “I am not the type of person to sue but I believe this was wrongful termination and employers like this shouldn’t be allowed to treat their employees unfairly.”

Posted by
Albert Fiorini
on February 22, 2015
I was released from a sales job on February 19th for failing to meet February sales goals. I had done 174% of January quota. My February month had started off slowly and was gaining momentum. I had several deals working and had a call later in the afternoon of the 19th which would have put me at 200% of February quota. During the early month of February I was segregated from more experienced reps from which I could learn from. This was my first 45 days of employment during a probationary period in an at will employment position. After termination one of the deals I was working on was given to another employee and is on the process of closing. I know I am at will but there must be some good faith requirement my employer should have to honor. Also I am 61 years old in an office of 20 and 30 something and feel i may not have fit in.