So, you think your mother (or father or grandparent or another elderly relative) is the victim of financial elder abuse. You have learned that this relative has turned over large chunks of cash and/or property to a trusted caregiver. You know that there are financial elder abuse laws designed to protect your loved one, but you have no evidence that your relative was in any way tricked into giving away that money or property. So, you decide to just let it be. 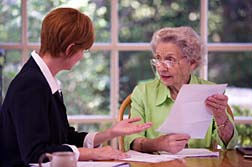 However, according to Philip Brown, founder and partner at Egerman & Brown, LLP, there is a different burden of proof in financial elder abuse cases when the accused was in a position of trust at the time the alleged abuse occurred, regardless of whether that person is a professional or a family member.

"The thing that ties together both professionals and family members is the trust that an elderly person puts into certain people," Brown says. "The elderly person trusts them and relies on them for good faith. When a person in a position of trust ends up with the elder's property, there is a presumption that it was obtained through undue influence.

"I am dealing with a case right now in which the elder has no children and is being cared for, or 'looked out for,' by a granddaughter. There are nieces and nephews of the elderly person, but the elderly couple deeded their house to the granddaughter, who then put a mortgage on the house, took out the money and got a house of her own. There is a legal presumption that she obtained the title to her grandparents' house as the result of undue influence because the grandparents were so dependent on the granddaughter. Unless she can come up with some pretty strong evidence, she will not be able to overcome the presumption.

"The burden shifts onto the person who received the property to prove that it was a fair transaction and that he or she was not taking advantage of the elderly person. In this case, the husband died, the wife is 87 years old, she is lucid and she did not want this to happen. She is now living with one niece and cannot go back to her home because the granddaughter moved all the furniture out. Other family members are also coming forward to say that she did not want this situation to occur."

It is important to remember that there is a difference in financial elder abuse law between placing your trust in someone and simply being taken advantage of. For example, when an elderly person is convinced to buy a 'lifetime' membership to a gym (when he or she clearly has no use for that membership), the elder has been taken advantage of but did not necessarily have trust or confidence in the person selling the membership. In order for the burden of proof to shift, the senior must have had trust and confidence in the financial abuser.

More FINANCIAL ELDER ABUSE News
This can include family members, friends, caregivers and even professional relationships such as doctors or financial advisors. "A financial advisor could be a position of trust. For example, if you have a husband and wife, and the husband manages the finances for years with a stockbroker, but the husband dies, the wife is reliant on the stockbroker to find out what's what. If that is continued for any period of time, you could argue that the dependency provision applies. It also applies in positions where the people have a fiduciary duty to the senior—that duty being not to profit off the person they are caring for."

The bottom line is that, if you think a loved one has become the victim of financial elder abuse, it is worthwhile to have a lawyer look into it. Even if you believe the elder did intend to give away her property, the decision may have been the result of undue influence, and in those situations it is up to the accused to prove that he or she did not take advantage of the senior. It is not up to you to prove that an abuse has occurred.

I believe there is reason to suspect fraud. And now, I am in the process of selling the house to pay off the loans.

Also, I believe there was a title change recently done.

Trying to find out if my father was made to make a will in favour of my step sister, whilst having dementia.

She is sole beneficiary and executor of the will, despite there being four children.

Thanks to this article I now know where to go with this.

Posted by
Rick
on May 21, 2013
been ripping my elderly mom 4 years and liter
Posted by
Lynda Kenny
on April 10, 2013
My mother-in -law... was a victim of financial elderly abuse... "taken advantage of" she had a stroke at 78yrs approx. Someone in the family (ex-daughter-in law).. stole 1 credit card,... now using my now 86 yr old mother in law's identity, used her SS# to get 8 new credit cards, and numerous checks forged in my mother in law's name, over the span of 6 years, over $ 28,000 in my mother in law's name. District attorney's office did not prosecute, but I do not know why? This has been investigated over 10 months now.