"I was prescribed Fentora due to chronic pain," says Marlene. "But I went crazy when I couldn't get anymore and I would do just about anything to get it—I even saw people put ads on Craigslist willing to pay anything for it."

"I was first given another pain-killer called oxycontin when I was diagnosed with fibromyalgia due to viral hepatitis C," explains Marlene (not her real name). Then I got tests back that I had carcinogenic cells in my blood. When I was given Fentora, they knew I had all kinds of serious problems. 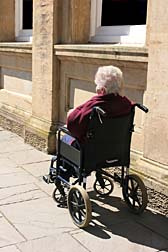 This drug made my heart beat incredibly erratically but I couldn't stop taking it. The doctor wrote on my prescription not to substitute Fentora with something else.

As if I didn't have enough on my plate, I broke both my feet—my bone density from the chemotherapy was shot. I got a stress fracture just from walking—a little tiny bone broke. I had a cast on that foot. Then a dog (who was happy to see me) jumped up on me and I fell over, breaking the other foot.

Then I was given the sucker form of Fentora. At first I got 800 mgs and they upped the dosage to 1600 mgs. I was supposed to feel some great, immediate relief of pain using these suckers. But the Fentora wasn't working: my doctor explained that I needed more because my body was used to it. And I was an opioid-tolerant person due to taking a lot of painkillers because of so many illnesses throughout my life.

Then she told me I was getting transferred to another doctor because she was moving to another city. I showed this doctor all the meds I was on and he flipped out: he said he wouldn't give me a prescription for Fentora because it was so addictive. And it would destroy my teeth.

I panicked, big time. 'No, you don't understand,' I said. 'I need these meds, I have a specific dosage and it reduces the pain just enough for me to get by.' He wrote me another prescription and changed the strength for one I already took. He also suggested methadone in place of Fentora but I refused. He told me that getting off Fentora is as hard as getting off methadone, but there weren't too many options.

I went crazy trying to get hold of my old doctor to get more Fentora. I called and called her old office. I must have driven them crazy! Finally my new pain management doctor increased my break-through meds until I got through this bad patch. And I had more meds for anxiety and panic.

I will never take this stuff again. I think Fentora should be used only on an inpatient level and only on stage 4 cancer patients.

I know some people will pay anything for Fentora. My prescription was $1,400 per month and I had to co-pay (I am permanently disabled). The doctor who prescribed Fentora said she won't write prescriptions for oxycontin or my break-through meds because they are 'too addicting' but she wrote one for Fentora—this was the most addicting drug I have ever taken!"

If a loved one has suffered damages in this wrongful death case, please contact a lawyer involved in a possible [Fentora Lawsuit] who will review your case at no cost or obligation.
Request Legal Help Now

Posted by
Mark E Fentanyl
on June 14, 2011
Fentora is a synthetic opioid to be correct, not an opiate. slight differences. opioids' are opiate like drugs with opiate agonist action. Opiate are natural or semi-snythetic opioid agonists. ( synth'd from morphine or thebaine). Morphine and Codeine are Naturals. Hydrocodone, Oxycodone, Hydromorphone, Oxymorphone, Dihydrocodeine, Dihydromorphine, levorphanol, butorphanol, buprenorphine, (naloxone, and naltrexone-these are not agonists but rather antagonists.