Despite exhaustive studies that found an increased risk of amputation among Invokana diabetes patients, Janssen Pharmaceuticals has published its own version of research. 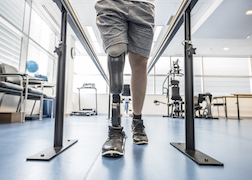 In this new “real-world”  study published in Diabetes, Obesity and Metabolism (Sept 12, 2017) Janssen researchers claim that they were unable to find a link between Invokana and amputations. All eight authors, whose addresses are Janssen Research & Development, LLC, Raritan, NJ, concluded “there was no significant difference in the rates of below-knee lower extremity (BKLE) amputation among users of their medication.”

Real-World Study Definition
The International Journal of Applied Basic Medical Research, (IJABMR) explains that there are number of issues with collection of real-world data, such as lack of good quality and sufficiently representative databases in many countries, incomplete databases, presence of many asymptomatic cases in real world and, more chances of bias.

Clinical Trial & Consulting explains Real World Evidence (RWE) studies as “information resulting from normal medical practice among diverse sets of patients. Data sources might include insurance claims, electronic health records, and other sources. Evidence derived from normal clinical practice outside of clinical trials, can be seen as a way to tailor health care decisions more closely to individual patients and a small step forward in personalizing healthcare for individual patients.”

However, randomized clinical trials (not real world studies) remain the trusted standard for assessing pharmaceutical drug and medical device safety and efficacy, according to Clinical Information News. It also notes that Real World Evidence (RWD) is the ‘New Normal’ and RWD is basically data collected under normal day-to-day circumstances found outside of a randomized clinical trial. “By itself, the data is meaningless but becomes real world evidence (RWE) when context about what is being measured is added, and the data is analyzed within that context. And this from the FDA’s blog: “real-world evidence” has its own issues that must be understood and dealt with carefully”.

Invokana Amputation Lawsuits
Interestingly, this new study financed by Janssen Pharmaceuticals, a subsidiary of corporate giant Johnson & Johnson comes on the heels of an increased number of Invokana amputation lawsuits claiming that Johnson & Johnson and Janssen failed to warn about the risks of amputation and that users could have possibly avoided amputated feet, legs and toes if the drug maker had provided prior warnings about the potential risks. “As we’ve seen, the FDA publicly announced the possibility [of the link] in May of 2015. The drug’s manufacturer, however, did nothing”, according to court documents in a series of new Invokana lawsuits. Plaintiffs claim that, rather than warn the public, Janssen actively defended its product.

Those Against Invokana
Consumer advocate groups such as the Institute for Safe Medication Practices, have been warning about Invokana’s link to increased risk of limb amputation for more than a year. In 2013, Sydney M. Wolfe, MD, of the consumer watchdog group Public Citizen told a congressional testimony that Invokana’s risks outweighed the drug’s potential benefits and opposed its approval. And the Institute for Safe Medication Practices (ISMP) claims that Invokana was not adequately tested in clinical trials before the FDA approved it.

Finally, the elephant in the room. Ben Goldacre, in his acclaimed book Bad Pharma, says the following:

“It’s clear from the start that there is a deep conflict of interest in pharmaceutical companies sponsoring trials on their own drugs. Industry sponsors 90 percent of published clinical trials. A worrying statistic given that industry-sponsored trials are four times as likely to produce positive results than independently run experiments.”

And this statement from Pharmaceutical industry critic, Dr. John Abramson, from his appearance on the Dr. Oz Show: “About 85 percent of clinical trials are now funded by the drug industry. They own that data. The docs don’t understand that they are getting a selected, filtered version of what the information is.”

This latest study is 100 percent funded by the drug industry…

If you or a loved one have suffered losses in this case, please click the link below and your complaint will be sent to a drugs & medical lawyer who may evaluate your Invokana Leg and Foot Amputations claim at no cost or obligation.
Request Legal Help Now

Posted by
Lisa taylor
on October 8, 2017
I'm taking invokana 300 mg once a day, I have started having pain in my left big toe and in my right foot my two small toes they are always hurting.