It seems that somebody at Cedars-Sinai Medical Center made a serious error when the hospital's CT Scanner was recalibrated in February 2008. Dozens of patients booked for diagnostic brains scans were blasted with megadoses of radiation – doses usually reserved for treating brain tumors. 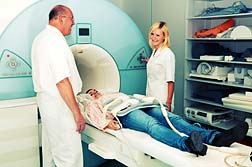 For 18 months the error went undetected. It was discovered only when a patient reported hair loss and a reddish-colored face following the procedure, according to an FDA-mandated hospital report. After contacting other patients who had undergone brain scans, hospital staff found 80 other patients who reported "patchy hair loss."

Some of the patients exposed to radiation overdoses at Cedars-Sinai were undergoing brain perfusion scans to aid in the detection of vascular anomalies. The long-term effect of excess radiation is difficult to predict, but it has been linked to an increased risk of cancer.

"These people have legal rights," says Los Angeles attorney Edwin Aiwazian, who was contacted by one of the patients involved and is currently investigating and researching the case. "The hospital admits that the radiation was delivered at eight times the necessary dose. That's huge.

"There is a potential medical malpractice case here against both the hospital and the doctors involved," says Aiwazian. "These patients did not expect to be subjected to radiation overdoses. They are now experiencing emotional distress, an increased risk of cancer, pain and suffering – these are all compensable damages.

More CT SCAN News
"There is a statute of limitations in California for this type of case," he says. "People should be aware that they only have twelve months to file. If they think they have been affected by this event they should seek out legal counsel without delay.

"The main injury here is an increased risk of cancer," Aiwazian adds. "People should not underestimate the consequences of that."

About 70 million CT Scans are done every year at hospitals across the US. Some patients may have received excess radiation in doses not significant enough to cause obvious damage.

However, the FDA is now advising hospitals to check the accuracy of brain perfusion CT scanners, suggesting that staff ask themselves if the dose seems reasonable before proceeding.

Edwin Aiwazian is a Los Angeles based attorney who specializes in class action law and personal injury law.