The Food and Drug Administration (FDA) has notified health care professionals about radiation overexposure in patients who have undergone perfusion CT imaging (essentially, a CT brain scan), done to diagnose and treat strokes. According to the FDA alert, 206 patients in an 18-month period at Cedars-Sinai Medical Center received radiation doses that were approximately eight times the expected level, causing a CT radiation overdose. Now, patients who were affected by the excess CT scan radiation have filed lawsuits against Cedars-Sinai and the makers of the CT machine, GE Healthcare Inc. and GE Healthcare Technologies.

Send your CT Brain Scan Radiation claim to a lawyer who will review your claim at NO COST or obligation.
GET LEGAL HELP NOW

According to an FDA alert, at least 206 patients in an 18-month period received extremely high radiation doses when they were undergoing perfusion CT imaging. Specifically, the FDA says that the patients were expected to receive a dose of 0.5 Gy (maximum) to their head but instead received 3-4 Gy. 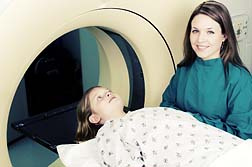 An article in The New York Times (October 15, 2009) notes that Cedars-Sinai Hospital disclosed that it had accidentally exposed patients to high doses of radiation. Meanwhile, in an incident unrelated to the FDA CT scan alert at Cedars-Sinai, at Mad River Community Hospital in Arcata, California, an x-ray technician has lost her state license for reportedly putting a 2½ year old through more than an hour of CT scans, according to the same article in The New York Times.

The FDA alert notes that some patients experienced hair loss and erythema (redness of the skin). However, also of concern is that overexposure to radiation that is not at doses high enough to produce obvious signs of radiation injury may put patients at risk for long-term radiation effects. Furthermore, there is a concern that the problem may be more widespread than just one facility.

"While this event involved a single kind of diagnostic test at one facility, the magnitude of these overdoses and their impact on the affected patients were significant," the FDA alert states. "This situation may reflect more widespread problems with CT quality assurance programs and may not be isolated to this particular facility or this imaging procedure (CT brain perfusion)."

According to an article in the Los Angeles Times, the CT scanner involved in the Cedars-Sinai incidents had been set at incorrect levels for 18 months, after the hospital made an error while reconfiguring the scanner.

The FDA has stated that all patients who were exposed to excess radiation have been notified. According to The New York Times, Cedars-Sinai said that its own flawed procedures were responsible for the overdoses, but also said that the manufacturers could install more safeguards to prevent such situations.

Perfusion CT imaging is conducted in urgent situations to identify any potential problems with blood flow in the brain. One situation in which it is used is to diagnose a stroke.

In a written statement, (quoted in the Los Angeles Times) Thomas M. Priselac, chief executive at Cedars-Sinai said, "We take very seriously our responsibility for operating medical equipment in the safest possible manner, and deeply regret the circumstances that led to patients undergoing CT brain perfusion studies receiving a higher than appropriate level of radiation."

If you or a loved one has suffered an adverse health event resulting from CT brain perfusion scanning, please click the link below and your complaint will be sent to a lawyer who may evaluate your claim at no cost or obligation.
Please click here for a free evaluation of your CT Brain Scan Radiation claim
Last updated on Apr-21-10

A new report suggests that CT scan radiation may be more dangerous than previously believed, as the medical procedure has been linked to at least 29,000 cases of cancer and 14,500 deaths in the US each year.READ MORE
FDA Concerned About Medical Radiation Exposure, Increases Oversight

In the wake of a radiation scare where more than 300 patients undergoing CT scans and other medical procedures in four hospitals were given too much radiation, the US Food and Drug Administration (FDA) has announced it will step up oversight for the potentially dangerous procedure.READ MORE
Health scans seen as risky in wake of ct radiation overdose case

Medical science has provided modern man with many tests to better facilitate preventative health care, yet some of these tests - notably the CT brain scan – may potentially be more harmful to the patient in the long run.READ MORE