It's not always the air, or the water, or even the climate that's of concern when we talk about environmental issues. Sometimes, it's the poor whales that bear the brunt of our actions, and in the case of Oahu's SuperFerry, whales can be killed. 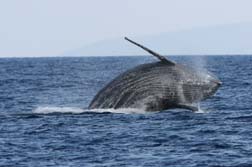 The SuperFerry was to travel between the islands of Oahu and Maui, and Oahu and Kauai. According to Marti Townsend, program director of Kahea: The Hawaiian-Environmental Alliance, the SuperFerry idea was first bandied about in 2003. The SuperFerry folks spoke to environmental groups who said an Environmental Impact Statement (EIS) was needed.

"They said why?" she said. The SuperFerry people then secured exemptions from both State and Federal laws concerning environmental issues. A collective of environmental groups then sued the SuperFerry entity at the State level and the week before the decision was released, the SuperFerry was in the water, beginning its regular sailing schedule.

"They started sailing early. They were trying to get people hooked on SuperFerry early before the Court decision came down," said Townsend. "It was completely legal as the Court didn't say they couldn't sail."

What the Court did say was that an EIS was necessary, Townsend thought they were vindicated. But that feeling wouldn't last.

The SuperFerry then went to the Governor asking for a special session to introduce bills. Several bills were brought forward, all variations on the same theme: that a high capacity inner Island vessel be exempt from environmental laws.

"The question," said Townsend, "is do they do an EIS before they sail or while sailing."

Ultimately the SuperFerry was permitted to do its EIS while sailing, a decision that so disturbed residents of Kauai that they formed a human barricade and blocked the SuperFerry from docking. To this day, service to Kauai is suspended.

That's not the case in Maui where the daily service puts the delicate eco-system of the island at risk.

"There are so many facets of environmental risk, it's unreal," said Townsend. "The main one is they go right through the Humpback Whale Sanctuary. They go through at 45 mph. In doing so, the way the keel is made, they slice through whales, not knowing, and kill them."

More News
She said that even the SuperFerry's dedicated staff, mandated to keep watch and avoid whales, can't possibly accomplish that goal. First, the SuperFerry goes so fast, it can't avoid a whale. Second, she said, the whales are often calving and nursing so spend most of their time just five feet below the surface; close enough for the baby whales to get air, but also close enough to the surface to be killed.

"It's completely misleading that an observer onboard is protection against hitting whales. They would be just like a little bump, they are going so fast."

There's also the problem of alien plant life and small animal species being transferred between islands by the SuperFerry. Once they arrive where they're not supposed to be, it's impossible to get rid of them. The entire island ecosystem is at risk.

"Once you introduce alien species, it's game over," said Townsend.

"Our concern is that the problems of ships going between the Islands are already happening. The purpose of an EIS is to ask what are the problems; what can we do to prevent them?" she said. "Doing an EIS now is pointless. It's a waste of taxpayers' money."

If you have noticed a violation of an environmental law, please contact a lawyer involved in a possible [Environmental Lawsuit] to review your case at no cost or obligation.
Request Legal Help Now