The way Angela Whitfield and her lawyers see it, she has been robbed twice. Once when a man put a gun to her head at the bank where she worked, and again when the bank denied Whitfield workers' compensation benefits for her physical and mental injuries--then fired her. 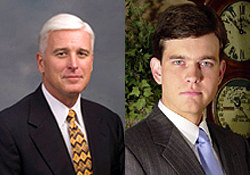 Attorneys at Hare, Wynn, Newell & Newton have represented clients in similar cases in the past, but they believe the Whitfield case is particularly egregious. "I can't image for the life of me being robbed at gunpoint and then my employer terminating my employment because I have been traumatized," says attorney Scott Powell, Whitfield's lawyer and former president of the Alabama Bar Association, his voice rising as he speaks. "That to me is such an outrage and this bank really ought to be hammered for this."

Written reviews of her performance at Regions Bank over a period of 16 years repeatedly describe Whitfield as someone who "exceeded expectations" and was "a role model" for other employees.

That certainly seemed to be the case on the morning the bank was held up on June 22, 2007.

Whitfield was the bank's head teller. When she saw a man in dark glasses and hooded jacket walk into the bank, she knew something was wrong. Seconds later the man produced a gun, leaped over the counter and demanded one of the tellers empty a cash drawer. When Whitfield saw another employee about to enter the teller area, she motioned for her to stay clear.

Seconds later the man with the gun grabbed 47-year-old Whitfield by the shoulder, forced her to her station, put the barrel of a gun to the back of her head and told her to hand over more cash or he would kill her. "All I could see was brains splattered all over the customer in front of me," Whitfield later recalled.

In the chaos, Whitfield remembered to include some tracker bills in the robber's loot. When he left the bank with $18,000, Whitfield called out "Lock the door."

The robbery was over, but Whitfield's nightmare was just beginning. Her heart was pounding, her shoulder hurt, and in the days and weeks that followed everything got worse, not better. Within days, she was seeing a psychologist and eventually she was diagnosed with post-traumatic stress.

Over and over in her mind, she heard the robber threaten to blow her brains out. She was afraid to return to the bank. She was afraid for the other tellers that had gone back to work. And she was in such physical pain that she eventually had to have surgery for a damaged rotator cuff in her shoulder.

"The law allows for an emotional injury like this to be compensable if it is accompanied by a physical injury, which she has, so the injury is compensable," says co-counsel attorney Jamie Moncus from Hare, Wynn, Newell & Newton.

At a time when the bank should have been supportive, Whitfield's lawyers believe its representatives actually conspired to deny she had been physically hurt during the robbery; they blocked access to compensation and then fired her. "Anyone who has heard the facts say we are absolutely right to pursue this case," says Powell.

Moncus has filed a 38-page complaint on behalf of Angela Whitfield alleging that her employer, the Regions Financial Corporation, engaged in outrageous conduct "beyond all possible bounds of decency in a civilized society." Furthermore, the complaint alleges that the Regions Financial Corporation committed fraud by coercing Whitfield to abandon her own doctor and see another one the bank chose for her—one who reported that Whitfield was not in fact hurt during the robbery.

The bank surveillance tape that would perhaps show exactly what happened that warm Alabama morning at the Inverness branch of Regions Bank is not available. "Well the last we heard, it had gone missing," says Powell. "We are waiting to get an explanation for that."

More EMPLOYMENT News
Angela Whitfield's husband owns a small grocery store and they get by on what he earns. "I don't think to this day that she can even go into a bank," says Powell.

Attorneys Moncus and Powell say they are seeking damages on behalf of Whitfield in an amount to be determined by a jury. "It is a little early to estimate damages," says Powell, "but I think a fair and reasoned jury will have no problem seeing this as outrageous conduct."