Vincent White, a partner at White, Hilferty and Albanese, spoke recently with LAS about the thorny problem of employment discrimination based on an employer’s perception (or misperception) of an employee’s sexual orientation. The hardest problem, according to White, is that the discriminatory comment or action often happens behind closed doors, with no witnesses. “It’s an elevator situation,” said White. “The doors close; the offense happens; and the doors open with no one the wiser, except the employer and a very shocked employee.” 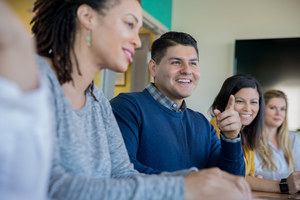 In many jurisdictions, courts do not interpret Title VII of the federal Civil Rights Act of 1964 to provide protection from employment discrimination on the basis of sexual orientation. With a 50-state practice, however, White’s firm often finds relief for plaintiffs in state or local law, which may be more protective of employee rights. In a given situation, there may also be recourse through a lawsuit for intentional or negligent infliction of emotional distress, harassment, assault, wrongful termination, defamation or a variety of other causes. Precedents involving gender stereotyping also show promise.

Race, sexual orientation and retaliation -- a situation as complicated as life


A recent lawsuit described by White involved a Hispanic employee in a predominantly Caucasian workforce. After he met with his supervisor to discuss long-term goals, including his desire for a promotion, he was asked if he was gay. He replied that he was not and reported the incident to Human Resources.

Thereafter, despite a previously exemplary record, the employee was repeatedly passed over for promotion in favor of less qualified employees and ultimately threatened with dismissal on the basis of a demonstrably false charge.

What just happened to me?


Incidents like these often catch employees by surprise. For those less determined than the worker described above, doubt, second-guessing and confusion may keep an employee from acting to protect their employment rights.

There are a number of telltale signs that an employee may be discriminated against, especially on the basis of his or her sexual orientation. These may include:

More than one way to skin a cat


In general, most states in the United States adopt what is known as the “employment at will” doctrine. In essence, employers are permitted to fire any employee for good reason, bad reason or no reason at all. In theory, employees can also quit for any reason. In practice, however, the employment at will doctrine is very hard on workers.

This rule has been moderated over the years by a number of statutes that create “protected classes” and prohibited reasons for termination. The most important of these may be Title VII of the Civil Rights Act, which makes it unlawful for an employer: The federal circuits differ, however, in whether they interpret the term “sex” to mean only gender as determined by physical sexual characteristics, or whether they are willing to interpret the term to include sexual orientation or identification.

State and local laws are often more explicitly protective of sexual orientation and identification than federal laws, sometimes with respect to only public employers and sometimes with regard to private employers, as well. The laws of New York and New York City are highly protective of employment rights, as the complaint described above suggests. Other state and federal laws extend employment protections on the basis of age or disability.

Even the conservative Fifth Circuit, which includes Louisiana, Mississippi and Texas, has held that same-sex sexual harassment in the workplace that is based on gender stereotyping is barred by Title VII of the 1964 Civil Rights Act. In EEOC v. Boh Brothers Construction, an iron worker in an all-male workplace claimed that his supervisor subjected him to verbal and physical harassment for months because he did not conform to Wolfe’s idea of how a man should act.

The gender stereotyping argument may be a legal avenue for workers subjected to discrimination based on perceived sexual orientation in even those jurisdictions that have not taken the step of explicitly protecting workers from this form of harm.

What should you do if you believe you have been discriminated against at work? Be prepared to pursue any internal remedies at your workplace. In addition, keep careful records of each incident. Keep those records at home. If possible, make an effort to quantify the value of what you have lost because of the discrimination – salary that would have been paid if you had been promoted, the cost of medical treatment related to stress, and so on. Most importantly, however, you should reach out to a lawyer who specializes in these lawsuits who can help you evaluate your situation.