One Down, One to Go: Could Pre-Emption for Medical Devices Be Next?

Yesterday's pre-emption ruling by the US Supreme Court that federal laws cannot pre-empt state laws with regard to lawsuits against drug companies, may have a bearing on similar protections for medical device manufacturers. 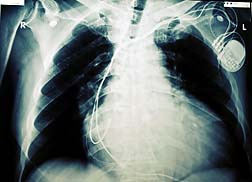 It was just a year ago that the US Supreme Court ruled that federal law does, indeed shield manufacturers of medical devices such as stents, artificial joints, heart defibrillators and other medical devices. The ruling was a blow to the thousands of patients who have been made to suffer with defective hip replacements, malfunctioning heart defibrillators and defective leads.

However, with the recent change in the Oval Office there has been talk from influential members of Congress of a returning bill that would effectively override the 2008 Supreme Court ruling on medical devices.

Diana Levine is the former Vermont musician who lost part of her right arm after suffering a botched injection of the anti-nausea drug Phenergan. Suffering from a migraine headache in 2000, Levine went to a local clinic and was given an intramuscular injection of Phenergan. When her nausea failed to abate, Levine was given an additional injection, this time through an IV. However the second injection accidentally punctured an artery and gangrene set in.

Her arm was amputated several weeks later, effectively putting an end to a music career spanning 30 years. Levine sued Wyeth Pharmaceuticals, the maker of Phenergan. Originally awarded $6.7 million by a jury, Wyeth appealed to the US Supreme Court, arguing that US Food and Drug Administration (FDA) approval of the drug, together with the accompanying warning label should rightly shield the defendant from any wrongdoing.

In a 6-3 ruling yesterday the US Supreme Court upheld the original ruling in favor of the plaintiff, conceding that federal law cannot shield drug companies against liability lawsuits filed in state court.

The Supreme Court ruling on medical devices last year was based in part on a piece of legislation, dating back to 1976, that gave the FDA authority over Class III medical devices such as heart defibrillators, artificial hips and breast implants. The Supreme Court ruled last year that the 1976 law also provided a legal shield to such devices known to undergo the FDA's highest level of review.

More Drugs/Medical Devices News
However, critics of that law and the subsequent ruling in 2008 cite the failure of an agency chronically under-funded and understaffed to adequately monitor up to 10,000 drugs and medical devices. And a former FDA lawyer who helped draft the 1976 law agrees that Wednesday's Supreme Court ruling with regard to drugs, will likely energize members of Congress who were already chomping at the bit to see last year's Supreme Court ruling on medical devices overturned.

Peter Barton Hutt, who is no longer with the FDA and practices in Washington, feels that yesterday's ruling will provide the momentum for the re-introduction of the Medical Device Safety Act. The latter was originally introduced last year by several Democratic lawmakers, including Frank Pallone Jr.—who serves as chairman of the health subcommittee of the House Energy and Commerce Committee—and Senator Edward Kennedy.

Supporters of that legislation have stated that the legislation is necessary because the FDA has repeatedly approved faulty high-risk devices for sale, according to reports.