There are many possible side effects of Dilantin, such as liver damage, irregular heartbeat, decreased blood pressure, and birth defects. But many Dilantin users, and their doctors, are unaware of the SJS risk. Patient advocates are arguing for stronger drug warnings about SJS, and a better drug reaction monitoring system at the FDA. 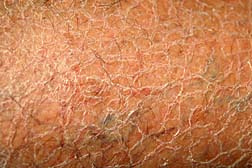 Stevens Johnson Syndrome is characterized by inflammation of the mucous membranes. Internal ulcers can result, as well as skin lesions, blisters, bleeding and exfoliation of the skin. Patients are typically treated in a hospital's burn unit.
SJS can be fatal in about 15 percent of sufferers, usually as a result of skin lesions becoming infected, or lesions developing in the lungs. According to the Stevens Johnson Foundation, the majority of cases happen in patients aged 20-40, and many fatalities from SJS are children.

Better Monitoring Needed
The Stevens Johnson Foundation, which was founded by parents whose children died of SJS, is committed to increasing FDA monitoring of potential drug reactions.
"Drug reactions are one of the leading causes of death in the United States," the Foundation states. "Yet, less than one percent are reported to the FDA, because there is no mandatory reporting system in effect for postmarketing adverse drug reactions".

Because of a lack of follow-up by the FDA, critics argue, once a drug goes to market there is little done to study (and prevent) adverse reactions. Because the information is not made available to doctors, they may misdiagnose drug-related SJS as something else, wasting precious time as the disease ravages its victims.

"When you get SJS, [many] doctors don't even recognize it," Valerie Chereskin, a former SJS sufferer, told Silicon Valley's MetroActive newspaper. "So they give you more of the drug that caused it--doing you more harm, which could end up killing you."

The Power of Lawsuits

More News
"I think [SJS] is a bigger problem than people realize," Chereskin notes. "When you talk to someone, you quickly discover other people who've also had [SJS]; they just come out of the woodwork."

If you can't count on the FDA or your own physician (let alone Big Pharma) to protect you from drug reactions, where can you turn? Many victims of SJS are turning to the courts, winning settlements and putting pressure on drug makers to take responsibility.

Just ask Marlene Kerber. After being prescribed an anti-convulsant, she ended up in a coma with burns over her entire body, and blinded by the disease. "I had none of my own skin left," says Kerber, who regained her sight after numerous surgeries. "I count my blessings every day, believe me," she says.

Kerber filed a lawsuit, and won.