Dilantin and SJS: Victims Describe a Nightmare of Pain and Misdiagnosis

"My skin was sloughing off and I felt like I was on fire," says Beverly M, who believes she got Stevens Johnson Syndrome (SJS) from taking Dilantin, an anti-convulsant drug.

It took doctors five weeks to diagnose Beverly with SJS. By then, she had developed reactive airway disease and lost 25 pounds due to GI inflammation, as well as burns in her mouth, eyes and across her body. 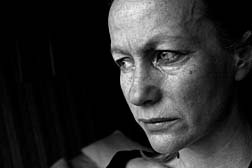 "Beverly is finally on the road to recovery, and she feels lucky to be alive. "When I read the stories of those who suffer from much worse symptoms, I weep for them," she states.

Diagnosis: "SJS Secondary to Dilantin"
As the Wall Street Journal reports, SJS often occurs as a result of a drug reaction to Dilantin or other prescription drugs, but precious time is often wasted when the syndrome is misdiagnosed.

"I think it is commonly misdiagnosed, especially in the early stages," says Dr. Norman Levine, longtime University of Arizona dermatologist, who sees about one case a year.

Dr. Howard Sandler of the University of Michigan described a case of "Stevens-Johnson Syndrome Secondary to Dilantin" in a 70-year-old woman who developed a rash over her entire body, with "a greenish discharge from the [eyes] and ulcerations over the lips." After being admitted to Intensive Care, the woman's liver enzymes rapidly elevated to near twenty times the normal level. It was at that point that SJS was diagnosed.

More News
"In this case, Dilantin appears to be the culprit," writes Dr. Sandler. "The patient's signs and symptoms resolved after stopping the Dilantin. Rapid recognition, discontinuation of the [Dilantin], and aggressive support were meaningful for the recovery of this patient."

Cases on the Rise, but Doctors Continue to Prescribe
Some physicians feel that drug-related SJS is on the rise. Dr. Jeffrey Nelson, a plastic surgeon and burn specialist says: "It feels like I've seen a lot more cases in the last three years than in the three years before that".

Many physicians do not seem aware of the risks associated with Dilantin and other drugs and critics are calling for stronger labeling on the drug. As well, Dr. Nelson states, there is little official tracking of the disease in relation to drug interactions, leaving many physicians in the dark when a Dilantin patient comes to them with symptoms of SJS.