DES Daughter Caitlin McCarthy: "You Might Not Have Cancer Today, But You Could Tomorrow"

For Caitlin McCarthy, one of the many women who was exposed to DES (diethylstilbestrol) prior to birth, discovering she was suffering from DES side effects was a shock. She had no idea she had been exposed to the drug, and therefore had no idea about the link between DES and cancer, or the health risks she faced. But that shock did not stop McCarthy from lobbying to obtain an apology from the US Food and Drug Administration (FDA) for its role in the DES pregnancy tragedy. 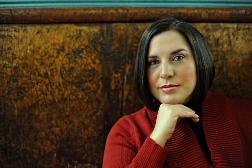 "I found out later in life that I was exposed to DES in utero," McCarthy says. "I didn't find out until 2005, at the age of 35. Unfortunately, I'm not alone in not knowing I was exposed. There were a lot of women who were pregnant and were aware that they were given DES. But some were prescribed prenatal vitamins with DES in them, so they were exposed but had no idea."

McCarthy had a history of precancerous cell activity, but she did not have HPV and her doctors, many of whom were not aware of DES, were unable to explain the problem. Finally, McCarthy visited a doctor who had experience with DES daughters.

"Within two minutes of looking at me, Dr. Louis Burke said, 'What year were you born?'" McCarthy says. "I told him 1970 and he asked if my mother took DES. I told him I didn't know, but she was with me so we could ask her. She told him she hadn't taken it directly, but that she was prescribed prenatal vitamins and we found out those contained DES. It was devastating for me."

So far, McCarthy's health problems have not progressed beyond precancerous cell activity. But she has special tests every year to ensure that has not changed. She says she lives in fear that at any point, her health situation could change and she will find out she has cancer.

More DIETHYLSTILBESTROL (DES) News
"I'm living under a medical guillotine," McCarthy says. "I'm always afraid at the time of my pap smear that this is going to be the year. There's that fear you live with—both the DES daughters and sons live with it. You move on with your life, but it's there hanging over you. You wonder if something will go wrong with you. You might not have cancer today, but you could tomorrow. No company has taken responsibility for the tragedy or apologized for it."

McCarthy was so appalled by the handling of DES that she worked with Senators John Kerry and Scott Brown to get the FDA to acknowledge in 2011 that DES was a tragedy. Although the FDA did not apologize for its role in the tragedy, McCarthy says the acknowledgement was important. Now, her focus is on educating people about DES.

"There are other people out there who do not know they were exposed to DES," McCarthy says. "They may have fertility issues and are considering treatment, but should they be exposed to additional estrogen? If they don't know they're a DES daughter, they might make a decision that puts them in harm's way."