To be known as a "DES Daughter" is not quite the same as proud membership in a revered woman's group akin to the suffragette movement that promoted women's rights and feminism in Great Britain and elsewhere in the early 1900's. And yet, "suffer" is a word that can be used alongside Diethylstilbestrol DES (DES), because that's what's been happening to the daughters of women who took DES decades ago to ward against miscarriages. 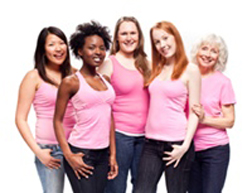 DES is a synthetic estrogen first introduced in 1938. It would go on to become standard care for the prevention of miscarriages and premature delivery for more than 30 years before the US Food and Drug Administration (FDA) moved on its concern that DES not only might be ineffective in treating that for which it was intended—there could also be a link to cervical and vaginal cancers in the offspring of women who took DES.

And now DES breast cancer may be on the horizon.

Arline MacCormack is one of those "DES daughters" referenced above. The Associated Press (AP) reported in January that Arline was 17 when she learned that her mother had been prescribed DES while pregnant. However, the young girl thought little of it until she was diagnosed with breast cancer six years ago at the age of 44.

MacCormack told AP that her cancer emerged in spite of precautions like having regular mammograms since the age of 40. "The characteristics of my cancer were for women over 60 typically. It wasn't the type of cancer a 40-year-old or a 44-year-old woman gets," said MacCormack. "When I read the research that's been done, I found I had more chance of getting it because my mom took DES," she said.

MacCormack is one of 53 plaintiffs to file a DES lawsuit alleging DES use by her mother fostered her breast cancer. The plaintiff's DES attorney cites recent research by Dr. Robert Hoover of the National Cancer Institute that suggests DES daughters present a 1 in 25 risk for breast cancer by the age of 55.

Diethylstilbestrol side effects are nothing new, as there have been thousands of lawsuits over the years alleging DES cancer of the vagina and cervix. Most of those settled out of court.

However, the breast cancer lawsuits appear to be the first to allege a link between breast cancer and a DES pregnancy, and the matter is being closely watched.

There are a number of factors that appear to suggest DES will be a growing concern for years to come. For one, DES observes a kinship with asbestos inherent with the late emergence of symptoms, decades after exposure. Additionally, DES was widely available and actively prescribed for decades as a standard of care.

Never patented, DES was churned out by a host of different manufacturers. The DES lawsuit in which MacCormack is a participant lists as many as 14 manufacturers. While the FDA suggested to doctors in 1971 that DES should no longer be prescribed to pregnant women, the agency never banned the drug, and it remained on the market (if not actively marketed). It has been reported that many doctors ignored the FDA overtures and continued prescribing DES, believing it to be still effective.

The FDA finally revoked approval of Diethylstilbestrol DES for use in humans…in 2000.

More DIETHYLSTILBESTROL (DES) News
It is estimated by the Centers for Disease Control and Prevention in Atlanta that as many as 10 million Americans have been exposed to DES over the years—pregnant women who were prescribed the drug, and their daughters among them. Sons too. It has since been reported that research is being conducted on the impact DES may have had on the offspring of DES daughters.

In other words, the grandchildren of women originally prescribed DES for pregnancy. It has been reported there is growing evidence that DES Grandchildren have been adversely affected by a drug ingested by their grandmothers.

According to DES Action USA, a not-for-profit support group, Judge Marianne Bowler of the US District Court of Massachusetts ordered the 14 defendants in the Boston lawsuit to immediately negotiate compensation for the 53 plaintiffs in the case.

Thus, akin to asbestos, it appears DES cancer will be on the legal horizon for a very long time…
READ ABOUT DIETHYLSTILBESTROL (DES) LAWSUITS

Posted by
Gloria Howell
on February 17, 2013
My mother took DES in 1959. I had multiple gynecologic problems and ultimately had a hysterectomy at age 30 because of precancerous cells found by biopsy. I developed autoimmune disease, had my thyroid removed because of precancerous tumors, had precancerous growths removed from my colon. My son developed rectal cancer at age 30, thank goodness it was also caught early and completely removed. I am constantly aware that the next mammogram may show cancer. I work in a hospital, so I have had immediate access to care when something isn't right, but what if I didn't? One of these precancerous conditions would have undoubtedly become full blown cancer. Why is it that one has to actually develop cancer before any legal action can be taken? Isn't it enough of a crime that we are sentenced to a lifetime of worry? In my case, a lifetime of autoimmune disease (that I am convinced was the result of DES)? That's like saying someone can fire a gun at me every day, but I can't press charges unless a bullet actually hits me. I think it's ridiculous that these drug companies have done this to us yet are not accountable for anything until the "bullet" actually strikes us.
Posted by
Denise Huhn
on April 30, 2012
1980, age 18. First gyno visit, I was asked if mother took DES because my cervix was deformed. Many specialist visits from there at University of Cinti to "burn off" dysplasia (pre cancer cells, as described by dr). I agreed to use experimental cancer cream, mis prescribed (3 x per day instead of 3 x per week). Adverse side effects. Ectopic pregnancy in 1988. Told would have more ectopic, but never explained why. Believed it was just my make-up. So I chose to never try again. Cervical cancer and hystorectomy in 1995. A life of laparoscopy envasion to determine pelvic pain. Endometriosis, ovarian cysts and a recent breast cancer scare (calcifications). My recent mammogram visit was frightening and will have me uneasy the rest of my life just waiting for the hammer to come down. I have had a life of uneasiness and worry, fearing the next female health issue.
Posted by
Eileen Coyle
on April 18, 2012
My mother was also given diethylstilbetrol while pregnant with me in 1959. I also had 3 miscarriages, 2 ectopics, a premature birth(3weeks) and haemoraged while pregnant with my 2nd child. Thankgod she was born full term.I go regularly for my colposcopy.
Posted by
Christine Weston
on April 9, 2012
My Mothers was prescribed diethylstilbetrol (DES) when she was pregnant with me. I had a premature birth, two miscarrieages , cervical cancer and had a complete hystrorectomy twenty five years ago. I am checked regularly for breast cancer and still have paps smears checking for abnormal cells.