DePuy Hip Replacement Lawsuits Taking Place All Over the World

While there have been a large number of DePuy hip replacement lawsuits filed in the US over the Johnson & Johnson unit's ASR Hip System, citizens around the world are taking action over the faulty products as well. 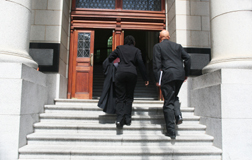 According to a recent article in the Sunday Sun, a retired UK woman now living in Costa Blanca, Spain, has filed a lawsuit against the company claiming she was left seriously injured after having the device implanted in 2009.

The news source reports that 70-year-old Diana Hedley, who moved to Spain with her husband 19 years ago in order to pursue missionary work, claims that rather than fixing her hip problem, the issue was only exacerbated. Now she claims she is forced to utilize crutches to walk and has decided to seek compensation from the manufacturer.

While Hedley initially filed the lawsuit on her own, more victims have reportedly joined in on the case, each of whom claim they suffered from the severe side effects of the product, according to the news provider.

Hedley told the news source that the 14 other patients joining her fight for compensation and medical costs have helped her cause.

"Other people have come forward to us with the same problems that I have had and there is a growing support for the class action," she explained. "What has happened to people receiving this hip replacement product and what they have suffered is quite horrifying."

The news source reports that a number of studies and patient reports have indicated the risks of the ASR hip replacement include metal-on-metal wearing, which can cause the bloodstream to become contaminated with pieces of metal. As such, patients such as Hedley can potentially suffer organ damage, in addition to the excess hip pain caused by the device.

More DEPUY HIP REPLACEMENT News
In another recent lawsuit on the other side of the globe, a Texas teacher claims she suffers from pain in her hip, groin and lower back as a result of the replacement surgery.

According to a release, Hilda Gibson is seeking compensation for the side effects of the hip replacement, which she claims forced her to leave her part-time position in order to recuperate and undergo additional surgery.

"Ms. Gibson has suffered tremendously because of this unsafe device," Gibson's attorney said in a statement. "Instead of enhancing her life, this defective product has hindered her in many ways. She suffered with constant pain and was forced to undergo numerous medical tests and additional surgery that wouldn't have been necessary had the DePuy ASR not failed."

According to The Wall Street Journal, Johnson & Johnson estimates that 93,000 patients around the world have been implanted with the faulty devices.