Every metal-on-metal hip replacement manufacturer has been accused of defective design, and because there are two or more articulation points where the metal components can grind against each other, some MOM hip replacements, such as those made by Zimmer and Smith & Nephew, allegedly include an increased risk of metallosis. Lawsuits against both companies also claim they knowingly sold the defective hip implants and knew or should have known the devices would cause problems. 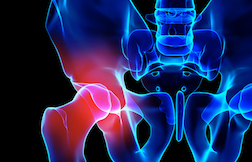 
A New Jersey federal court on February 26 allowed a product liability action to proceed against Zimmer. The medical device manufacturer is accused of building a defective hip replacement device and not providing adequate warnings or instructions about its use or safety.

Zimmer attempted to dismiss the five-count complaint filed by Matthew and Robin Cerniglia, but U.S. District Judge Susan D. Wigenton allowed the following counts to proceed (she agreed to dismiss breach of express warranty, saying the lawsuit did not back up that claim):


Matthew Cerniglia in 2006 was implanted with a Zimmer hip replacement with a femoral stem. By 2016 he felt pain in his hip and thigh and tests revealed the implant had fractured and caused metallosis-- cobalt and chromium had leached into his bloodstream. (Also in 2016 a meta-analysis found people with MOM hips more likely to die earlier than those with other hip replacements.) In October 2016, Cerniglia underwent total left hip replacement surgery, followed by another surgery three months later.

Judge Wigenton noted that in August 2006 Zimmer recalled the femoral stem in question over concerns about its "proper metal fatigue strength" and said that "Defendant's conduct was malicious or evidenced a reckless disregard for the potential harm to patients…This is sufficient to permit Plaintiffs' punitive damages claim to proceed…Whether Plaintiffs will be able to prove malice or reckless disregard at trial is another matter."


Smith & Nephew is the newest medical device maker facing more than 200 lawsuits claiming its Birmingham Hip Resurfacing (BHR) system can fail prematurely, causing pseudotumors and metallosis and that the UK company knowingly sold the defective BHR implant and then tried to cover up signs of problems.

(Hip resurfacing is typically a procedure in which the ball-shaped bone at the top of the thigh is trimmed and resurfaced with a smooth metal covering while damaged bone and cartilage within the hip socket is removed and replaced with a metal shell. The BHR system uses a cobalt-chromium alloy for both parts, but this "metal-on-metal" design allegedly caused metallosis and bone and tissue necrosis.)

According to the Legal Examiner, Lydia Constantini developed severe pain and side effects after undergoing BHR system hip resurfacing surgery in 2008. She had to undergo a risky hip revision surgery in 2013 and her surgeon noted that she had developed metallosis and pseudotumor in her hip joint.


Over 200 product liability lawsuits, including Constantini's complaint filed against Smith & Nephew over the BHR system have been centralized before U.S. District Judge Catherine Blake in the District of Maryland. As well, a 160-page lawsuit has been filed in the Maryland federal court by the hip implant attorneys at Jones Ward PLC, detailing why the BHR system is defective and causes patients to suffer injuries due to metallosis and pseudotumors.

Part of their complaint states that women are particularly at risk of premature failure. "The BHR has a 26 percent failure rate in women after ten years, but Smith & Nephew failed to communicate this risk properly to the medical community and to patients. The industry benchmark failure rate for a hip device is no more than 5.0 percent at ten years." Their lawsuit further states the following:

More DEFECTIVE HIP IMPLANT News
"The inventor and designer of the BHR system, Dr. Derek McMinn, who was paid tens of millions of dollars to promote the hip device, presented biased and misleading data to U.S. regulators about the safety of the BHR... The most recent example of these misleading marketing efforts is a campaign by McMinn himself, modeled after the presidential campaign slogan of Donald Trump, to "Make Resurfacing Great Again," through the use of a safer resurfacing device that includes a polyethylene acetabular cup, the PHR, which purportedly avoids the problems associated with metal-on-metal articulation in the original BHR system. McMinn explicitly states: "Together, this metal-on-polyethylene articulation is an ideal solution for patients, particularly women, who have an allergy to metals."

To date there have been no trials, verdicts or settlements in the BHR cases…