Teen Mother on Depakote Concerned about her Newborn

"Justice, my 15-year-old daughter, was on Depakote for three years, including the first 28 weeks of her pregnancy," says Angela Lee, Justine's mother and a new grandmother. "I feel so guilty because I gave this medication to my daughter; I wish I knew more about Depakote beforehand." 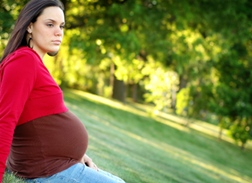 Justice has bipolar disorder and ADHD and was prescribed Depakote as a mood stabilizer—it is widely prescribed to adults and even children. Unfortunately Angela Lee didn't find out that Justice was pregnant right away. "My daughter is small and she wasn't showing at all," says Angela Lee. "She walked around with hoodies on—it was cold at that time of year. And she didn't even realize she was pregnant until a week before she told me, when she felt movement in her belly. The flu season was going around so we figured her morning sickness was just that. I have another teenage daughter and she was going through the monthlies so I never caught on that my oldest wasn't.


"My daughter was taking 500 mg three times a day. Figure that amount for 28 weeks—a lot of Depakote was passed on to my grandson"
"As soon as Justice told her dad and me we took her to the doctor—the next day. The first thing they asked what kind of medication she was on. They told me to immediately stop the Depakote but they were unsure of the Vyvanse. 'Depakote is unhealthy to take and it could cause problems with the baby,' the doctor said.

"The alarm bell rang right away. No one gave us any kind of warning information; we got the pamphlet when Justice started taking Depakote but it doesn't say what will happen if your daughter gets pregnant. Our biggest concern is that Depakote can cause birth defects.

"I got my daughter set up with an OB/GYN and explained the meds Justice was on. The OB/GYN also told us that it is unsafe to take Depakote but to keep her on the Vyvan. Then a nurse told us that Vyvan is also unsafe so we stopped both meds cold turkey because we were afraid of the risks to the baby. Justice had a lot of ups and downs without Depakote but managed to pull through. She had lots of anger and aggression without any meds to keep her stabilized.

"With the first ultrasound, they saw a potential problem: the tube that goes to the baby's kidneys to pass urine is smaller than normal and they are concerned about that. When Christian is six weeks old he will have another ultrasound, and the worst-case scenario is that they will need to do surgery. That scared me right away.

"Not only that, our pediatrician told me that the way his bones are formed in his skull are abnormal. It is another potential problem they have to keep an eye on, to make sure his skull bones fuse together properly.

"Christian was born May 27 so he will be five weeks old tomorrow. Baby and mom are doing well now but we are also having an issue about formula. Justice can't breastfeed because she is back on Depakote. When Christian was first born she attempted to breastfeed but didn't produce any milk so she went back on the meds two weeks later.

More DEPAKOTE BIRTH DEFECT News
"Another birth defect I am concerned about is distention and dilation of the renal pelvis. And in males the urethra opening could be in the wrong place. We already have warning signs.

"I have been doing a lot of research on Depakote side effects and found a relationship between the drug and all of these side effects. We talked to the pediatrician about it 10 days ago but he didn't go into any detail. It could be too soon but the OB/GYN is going to re-check his kidneys and the pediatrician will monitor his skull.

"I want to tell the makers of Depakote that their warning label wording needs to be more in depth: they should warn people and children about potential birth defects. My daughter was taking 500 mg three times a day. Figure that amount for 28 weeks—a lot of Depakote was passed on to my grandson. The manufacturer needs to make it absolutely clear that this med cannot be taken while pregnant, especially for teenagers."