Battalion Chief Gary Kolberg from the Sheyboygan Fire Department in Sheboygan, Wisconsin says the dehumidifier in the house his firefighters were called to was so incinerated he couldn’t even tell what the serial number was on the unit. 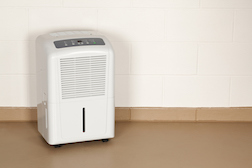 “It was so destroyed it is impossible to say what happened to it and there was a lot of other material in the basement and the fire spread quickly,” Kolberg told LAS.

Sheyboygan has recently had two house fires caused by dehumidifiers that overheated and ignited. In both cases it was smoke alarms in the houses that prevented the situation from involving any loss of life. The most recent fire on November 7, 2016 in Sheboygan caused about $30,000 in damage.

The fire that Kolberg personally attended to weeks earlier was much worse. “There was a lot of smoke damage,” says Battalion Chief Kolberg. “The total damage to the house was about $130,000 and the damage to the contents was about $70,000. It was a ranch style house and the dehumidifier had been running in the basement.

“There was, I believe, a family with one little girl in the house at the time,” he says. “Smoke detectors and a quick reaction time from us likely prevented this from being much worse.

“We haven’t had these dehumidifier type fires before and then all of a sudden we have two,” he says.

In fact, according to the US Consumer Product Safety Commission’s (CPSC) website, there have been 450 reported fires and $19 million in damages related to the dehumidifiers manufactured by Gree Electric Appliances of China.

The recall, issued by Gree Electric Appliances of China in cooperation with the CPSC, was first issued in September of 2013 due a “fire hazard and burn” risk. At that time, the defective dehumidifiers were reported to have caused $2 million in damages.

The recall was expanded in January 2014 to include just over 400,000 units. This latest recall and massively expanded notice, includes 6.5 times that number of defective units.

All are manufactured by Gree in China and sold under 15 different brand names.

More DEFECTIVE PRODUCTS News
According to the CPSC’s website the recall involves “20, 25, 30, 40, 45, 50, 65 and 70-pint dehumidifiers with brand names Danby, De’Longhi, Fedders, Fellini, Frigidaire, GE, Gree, Kenmore, Norpole, Premiere, Seabreeze, SoleusAir and SuperClima. Recalled model numbers and date codes are listed below. The brand name and the pint capacity are printed on the front of the dehumidifier. The model number and date code are printed on a sticker on the back, front or side of the unit. The dehumidifiers are white, beige, gray or black plastic and measure between 19 and 24 inches tall, 13 and 15 inches wide, and 9 and 11 inches deep.”

Consumers that currently own one of these units are advised to unplug it and contact the company for a refund.
Attorneys say some owners of units that have caused many of the 450 fires may have a cause of action.