Residents along Desert Tortoise Drive and Shell Turtle Lane in Mesquite, Nevada were taken by surprise when rainwater charged toward their homes. "It doesn't rain much here in Mesquite or Las Vegas, but when it does, their backyards are flooded," says Neil Hyman, a young attorney with a good track record for recouping losses in construction defect cases. 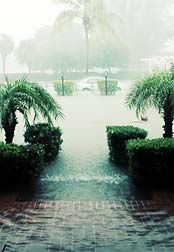 Homeowners tried to sort out their problems with the developer and the builder, but after getting the run-around, they went straight to Hyman.

They have now filed suit in Nevada claiming that the defendants, Primex Properties and Advanced Construction of Mesquite, were negligent in the design, development, selection of materials, construction and approval for sale of the properties.

"One of homeowners had a patio table at the back of the house that was completely submerged in mud. It was like a lake back there. In one case, the water went all the way up to the patio and was seeping in through the screen doors," says Hyman. "This is some serious flooding."

Hyman quickly despatched an engineering firm to assess the situation and report back. "There is literally no provision for drainage on this hillside," says Hyman. "There are no retaining walls, the slope may be too steep, plus there are no trees or shrubs that direct the water somewhere else.

Homeowners in Nevada can take cover under a section of the law called Chapter 40 that protects people in the event of defects in residential construction. "Under Chapter 40 these homeowners are also entitled to relocation costs if they would like have to move out for a while, as well as costs for the loss of the use of their property," explains Hyman. "Then of course there is compensation for attorneys, and in a case like this, costs for expert fees could be extensive."

Primex Properties and Advanced Construction have denied liability in the suit.
Hyman is now anticipating a schedule for discovery and is preparing to proceed to trial if necessary.

Hyman's main area of practice is construction, and he says there is no shortage of clients in Clark County, Nevada. "Homeowners with construction defects in their homes are always popping up," says Hyman. "I take a lot of single residential home owners that other lawyers aren`t interested in getting involved with."

Neal Hyman is the principal and owner at Hyman Law Offices He is a graduate of the University of Nevada (B.A. 1993) and the California Western School of Law, San Diego (J.D. 1996). His practice areas include construction defect, personal injury, criminal defense, real estate and nursing home liability.

Posted by
julio
on February 22, 2016
my crawl space under house is like a huge lake and flooding sinks in hallway.....just bought house in Nov.5015