“The nurses in the hospital explained to me that baby Amber’s infection was due to the catheter. And my daughter’s autopsy states that infection was the cause of death,” says Tara. 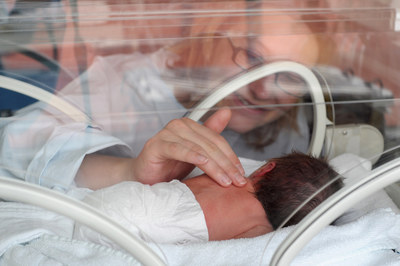 Amber was born prematurely and although she was underweight, she was healthy. “Amber needed a feeding tube that went from her throat into her stomach and she was gaining weight,” Tara explains. “A few weeks after she was born, a nurse was feeding her and an air bubble in the syringe went into her stomach—it caused inflammation and burst her stomach.” It was like a domino affect—Amber’s stomach acid destroyed the large intestine and most of the small intestine.

Amazingly, Amber got through a 12-hour emergency surgery and several more surgeries, and a Broviac catheter was placed directly into a central vein. (This type of catheter is a long, hollow tube made of silicone, and is typically referred to as a central venous catheter because it is inserted into the large vein leading directly into the heart. A Broviac catheter exits the skin and is used for a patient that needs venous access every day.)

All of Amber’s food and medications were delivered via this Broviac and at the same time she was having numerous surgeries, one of which allowed her gallbladder to function as her stomach. “They caught the first infection and she pulled through. But a second catheter infection caused internal bleeding and her tiny organs shut down from the infection,” says Tara, fighting back the tears. Amber lived for six months—she never went home.

More DEFECTIVE PRODUCTS News
Tara was seventeen years old back in 1996 when Amber was born. But she is still hurting. “I didn’t have another child because I was too scared; I didn’t want to bring another baby into the world to suffer like Amber did,” she says. Besides her sadness, Tara has taken on another emotion. “I am just now learning about all these catheter recalls and I’m furious. Back then I had no clue about how hospital infections are acquired and it seems like people still don’t have a clue.

“I am thankful that I can tell people about Amber on LawyersandSettlements. I didn’t file a claim for the money—I just wanted the opportunity to talk. Money won’t bring my baby back. And I didn’t sue the hospital. Perhaps there are children out there that I can help in some way, by warning parents about these catheters.