Yet another catheter recall has been issued by the FDA. Vascular Solutions, Inc. recalled its Venture Catheters because they can potentially cause a blood clot, which can result in serious injury and even death. 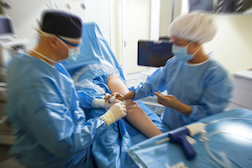 The FDA on June 22 defined the Venture catheters as a Class I recall, meaning "a situation in which there is a reasonable probability that the use of, or exposure to, a volatile product will cause serious adverse health consequences or death." Vascular Solutions, however, announced the worldwide recall two months earlier by way of an “Urgent Medical Device Recall notification distributed to purchasers of the affected product.” The medical device company claims the problem is due to a manufacturing defect and not a design defect.

This isn’t the first time that Vascular Solutions has recalled its catheters. Just last year Twin-Pass Dual Access Catheters were recalled due to excess material left at the tip of the catheter after the manufacturing process. Excess material at the catheter tip can break away while it is in the blood vessel and in doing so can cause blood clots, embolisms or the migration of excess material to vital organs.

April of 2016 seems to have been recall month. Cook Medical issued a recall of its catheters with Beacon Tip technology due to complaints about the tip breaking and/or fracturing. The company had already recalled certain lots of the catheters in August, 2015. According to the company, most of the fractures and/or separations were discovered prior to patient contact.

Strangely, Pete Yonkman, president of Cook Medical said that, “If we cannot tell our customers how to keep our products safe, then we aren’t comfortable leaving them on the market. It’s a risk we’re not willing to take. Patient safety comes first – period.” Is the company inferring medical malpractice? (In December of 2016 a woman from Texas died as a result of an 8-inch fragment of catheter left in her heart in 2007. Her husband filed a lawsuit against the hospital for failing to remove it for seven years.)

And Boston Scientific recalled its Fetch 2 Aspiration Catheter because of the potential for the shaft to break in the middle of a procedure. Also made by Cook, the Shuttle Select catheter was recalled in October 2015.

Why are there so many catheter recalls? One answer could be how they were placed on the market. The Beacon Tip, the Shuttle Select and the Fetch 2 Aspiration catheters were all approved through the FDA’s 510(k) Clearance, a fast-track process that doesn’t require clinical trials. Instead, a product such as a catheter can be approved if it is similar enough to a product already on the market and performing well.

More DEFECTIVE PRODUCTS News
It is not clear how the Venture catheter was approved. In a press release back in August, 2012, Howard Root, CEO of Vascular Solutions, said that "We are pleased that we were able to work successfully with St. Jude Medical to keep this important clinical tool on the market and available to the physicians who use the Venture catheter infrequently, but in some of their most challenging procedures…While the Venture catheter is an established product, the remaining finished goods inventory being transferred to us is extremely limited, which will only allow very limited sales until we have established manufacturing in-house and can perform a complete commercial re-launch in 2013." By 2013, the Venture catheter was generating $3 million in annual worldwide sales, including approximately $2 million in U.S. sales, according to Vascular Solutions.

Vascular Solutions may have to put aside some of its profits—attorneys are looking at complaints and lawsuits could be filed. The medical device company claims the catheter problem is due to a manufacturing defect and not a design defect. And it won’t be the first time that Vascular Solutions and Howard Root have been in court. According to the Star Tribune (Feb 2016), both the company and Root were acquitted on all counts in a criminal case that had alleged a conspiracy to illegally promote sales of its Vari-Lase Short Kit device to treat varicose veins.