Authorities are seeking to file action against Hallmark Meat Packing for unfair business practices, following felony charges alleging that sick cattle were forced into the slaughter box by cruel methods. These charges are a result of a video that was released in January that revealed the ill treatment of the animals, which has now led to a nationwide recall of the beef distributed by the company to school cafeterias. 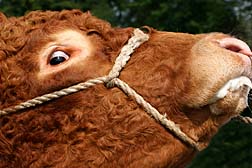 The former manager of the slaughterhouse, Daniel Ugarte Navarro, of Pomona, could face nearly nine years in prison if convicted of the three misdemeanor counts of illegal movement of a non-ambulatory animal and five felony counts of cruelty to animals. Navarro was in charge of the pen at the meat packing company, and was shown using electric prods, forklifts, and water hoses spewing high pressure water to force the animals to move.

In turn, the cows were ill and were still allegedly slaughtered for distribution to schools, which is what provokes the desire of authorities to seek action against the company for unfair business practices. The schools that received the beef were led to believe that the beef was safe to eat when, in fact, the beef could be harmful to the health of the children eating it.

Also implicated in the case is Luis Sanchez, who faces three misdemeanor counts and, if convicted, could face up to three years in prison. After the video was released in January, both Sanchez and Navarro were fired by Hallmark. At Friday afternoon's arraignments, neither Navarro nor Sanchez showed up, so warrants have been issued for their arrest.

Sanchez states that he simply obeyed the orders given to him in hopes that he would not lose his job. He acknowledges that the actions were illegal, but he was obligated to follow through with them. He is an immigrant from Mexico who is not documented and was employed with Hallmark for six years.

It was last week when the U.S. Department of Agriculture halted inspections, which closed the plant. The inspector general for the USDA is conducting an investigation, but members of congress have also called for an investigation on the federal level to ensure the safety of food that is supplied to schools by the USDA.

It was on December 19, that the San Bernardino County district attorney's office was presented with the video by the Humane Society. Following the presentation of the video, the Rural Crime Task Force of the Chino police department staged an investigation and conducted interviews with witnesses to back up the allegations made by the Humane Society.

In the video, 11 instances of alleged illegal actions between the dates of October 11, 2007 and November 9, 2007 were recorded. There was a Humane Society investigator working at the plant undercover and he was responsible for shooting the footage with a pen camera attached to a button.

More BUSINESS News
The footage revealed several instances of alleged animal cruelty, including four instances in which cattle were executed because the workers were unable to get them to stand up. Fortunately, these cows did not enter the food supply. In another instance, a cow was shocked with a cattle prod after it collapsed. Once it stood up, it was led to the slaughter box. Cattle that cannot walk are not allowed to enter the food supply because of the high risk of mad cow disease.

However, many of the animals were allegedly allowed in the food supply, which is indicative of poor and unfair business practices, causing schools to pull suspect beef from their cafeterias although the USDA did not find evidence that those that could not walk at all entered the food supply.

If you are a victim of unfair business practices, please contact a lawyer involved in a possible [Unfair Business Practices Lawsuit] to review your case at no cost or obligation.
Request Legal Help Now