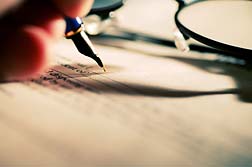 Red Curb Investments, a real estate development firm, has filed suit against the 45-year-old actor claiming that Cage and his former accountant, Samuel Levin, failed to pay back approximately $3 million in loans. A second $3 million suit charges that Mr. Levin defrauded Red Curb by failing to disclose the true state of Cage's finances.

"(Our client) was assured that Cage had substantial assets consisting of high-end residential property, yachts, airplanes, antiques, custom automobiles, jewelry, furs… to assure repayment of the (loan), (but) the values of Cage's assets were grossly exaggerated," claims the suit, as reported by Digitalspy.com.

Cage, whose real name is Nicolas Coppola, is currently embroiled in legal proceedings against Mr. Levin over the mismanagement of the actor's money over the past several years. Cage currently owes $6.3 million to the IRS, has defaulted on a $2 million bank loan and is facing a $13 million suit from the mother of his son, Weston.

If you or a loved one have suffered losses in this case, please click the link below and your complaint will be sent to a bankruptcy lawyer who may evaluate your Business claim at no cost or obligation.
Request Legal Help Now

Click to learn more about LawyersandSettlements.com
LawyersandSettlements.com is an online news and information site for the general public and legal community. As a legal news resource, we have emerged as an independent & trusted voice. We provide detailed and quality information on various lawsuits filed including Bankruptcy Cases, Financial Cases, and Real Estate Cases.