Chantix Patients: No Control Over Thoughts

Patients who have taken Chantix are reporting that they have very little control over their thoughts when they start thinking about committing suicide. They say that they do not know where the suicidal thoughts come from and it is a struggle to not kill themselves when the thoughts arise. Fortunately, the two women interviewed for this article were able to resist the urge to commit suicide. Unfortunately, not everyone has been able to.

Joni C. had been taking Chantix for approximately one month when she realized her moods were changing. She says she noticed that she was depressed, her mind was racing and she had thoughts of harming herself.

"There were times I caught myself fixing to hurt myself, but I thought about my children and grandchildren and that stopped me," Joni says. "I thought about running my car up a tree several times. I had absolutely no control over my thoughts, so I would pull my car over to the side of the road and just start crying and shaking, realizing what I had been about to do." 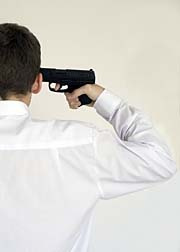 According to Joni, her doctors agreed that Chantix could have caused her problems. After dealing with the extreme moods, Joni told her family that she needed to get some help, so she was taken to the emergency room. Joni spent five days in the hospital and says that two other women were also in the hospital after taking Chantix.

Angela W. also says she suffered serious problems after taking Chantix. She says that she would never have known about the risks associated with the drug if an acquaintance, a grocery store clerk, had not warned her. "The reason I'm bringing this to anybody's attention is that I wouldn't have known to watch out for the signs of suicide or danger because my doctor didn't tell me," Angela says. "But, three days prior to my incident, someone said that they saw something on the news about it."

Angela says that leading up to her incident she had only mild side effects. She suffered from nausea and an inability to sleep well at night combined with vivid dreams. She says that because of the nausea she only took half the recommended dose in the morning and at night. She also says that she had quit smoking three days into taking Chantix and suffered no withdrawal symptoms when she stopped smoking.

"On the 48th day [of taking Chantix], I went to bed and my boyfriend called and said, 'I got a late notice on the phone bill, you need to call tomorrow and pay the phone bill.' I really did not consider it a major issue and even said, 'It's no big deal,' got of the phone and went to bed. I hadn't been drinking and I had no other medication in my system. Then, all of a sudden, I had an overwhelming urge to kill myself. I heard voices that kept telling me to go upstairs, get a knife and slit my wrists. I had never had any depression before then, no suicidal thoughts, this just came out of the blue.

"This urge lasted for about seven hours before I understood what was going on. I fought the urge to kill myself for seven hours. Then morning came and I went upstairs (I had been scared to before), sat my older sister down and told her about my 'incredible urge.' Everyone in my family knows that is not me. When I started talking to Sue, I realized that it was what the grocery clerk had talked about. From that night I didn't take any more doses.

More News
"It happened in a moment—nothing led me up to that point. It was incredible. For three days after I experienced a lot of really low moments, but nothing as serious. That night, it wasn't just 'what if I killed myself,' or 'maybe I should kill myself.' It was 'go do it now.' I have never experienced it since I was on Chantix and never before. It took me three days to come out of it. I would rather smoke than take Chantix and be suicidal.

"It's important to get this out. I didn't get a lot of information about Chantix before I took it. If the clerk hadn't told me, I might not have quit the medication in time. That I didn't commit suicide is amazing to me. It's crazy, the story sounds crazy—I think my state of mind was absolutely crazy. It's important that people who have this story should tell it."