Experts: Clinical Trials Should Have Shown Chantix Side Effects

More CHANTIX News
Experts say that lawsuits from patients and warnings from the US Food and Drug Administration (FDA) over Chantix side effects could have potentially been avoided if clinical trials had been structured differently, Reuters reports. 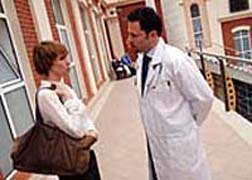 According to the news provider, Pfizer, the manufacturer of the medication, is facing a civil lawsuit that involves the complaints of at least 1,200 patients. Additionally, sales of the drug have been declining substantially, the news source said.

However, a number of experts claim that these issues could have been avoided if the trials, which tested the drug on thousands of smokers, had simply included people with depression.

While the practice may seem to benefit drug companies during beginning testing stages, the strategy can ultimately hurt them down the road when the treatment is marketed around the world, the news source said.

The FDA's decision to force Chantix to carry a "black box" warning and the subsequent lawsuits that have resulted reportedly followed complaints of erratic behaviors and a number of suicides associated with taking the medication, the news source said.

Posted by
Kristi
on November 25, 2012
I took Chantix as prescribed by my psychiatrist. A few months later I was withdrawn, paranoid and wanted to end my life. I was never warned about the side effects. I became increasingly aggitated, aggressive and closer and closer to suicide. I acted out my aggression and caused about $30,000 in property damage not to mention my reputation with my neighbors and family. Then I couldn't take the embarrassment and shame of the damage I had done and took an overdose. I ended up in a Mental Hospital for six weeks as inpatient then another six weeks as outpatient. It took a long, long time for the doctors to get my medications correct and was extremely expensive. I finally went back to work, in a new position that I had earned just a few months before taking Chantix. I could not function, was lethargic, confused, couldn't read and understand what I had read. I felt like I was brain dead. The day they let me go was the saddest day and the most humiliating day. I have been on disability and financially the last three years have been harder than ever. What really makes me mad is that the doctors that I see and tell them about Chantix act as if they have never heard anything negative about it. I was told in the hospital that I should have never been put on such a drug because I was already being treated for depression. When I told this to my regular psychiatrist after leaving the hospital she basically told me I was a liar and didn't know what I was talking about. This is a seriously dangerous drug and now they are GIVING it away to people. I cannot understand how they have been able to get away with this. It needs to be taken off the market and studied further. Too many people have suffered.
Posted by
terri
on April 11, 2012
I took two Chantix scrips back/back in '07. Endured two, long hospital stays PLUS psyche unit in '08. Excitement was what I felt when it hit the market. Couldn't WAIT to get started! I WANTED it to work!! Was a closet smoker - - 1 to 3 cigs. per day. Time to put that to rest...almost put myself to rest instead.

Then...slowly...but surely...I started losing ground. Mentally and physically I was detaching. While I could FEEL the spiral...couldn't do a da_ n thing to STOP it. This is a sneaky, unpredictable, scary, VERY scary drug. Once in your system only God knows how and where you will land.

Started dreaming nightly of deceased, loved ones coming to me...BEGGING me to go w/them. Tried to assure me my job was done here. Kids are grown and raising children of their own...hubby of 37 years would have no problem replacing me...nor would my employer of 23 years (LOVED my job!). Wasn't sad...just flat.

First hospital stay was due to possible heart attack. Taken by ambulance in middle of nite...stayed a week...released w/diagnosis...possible virus.

Second hospital stay which included psyche unit...was due to serious suicide attempt. In coma for six days while family watched a vent breathe for me. It was a nightmare. Relationships were permanently broken. Everybody was looking for an answer...and pointing fingers. My self respect along w/my babysitting rights w/my 6, beautiful grandchildren...stripped.

No one can undo the past. No amount of money can take away the pain and mental anguish suffered by all. I never knew a little, blue pill would have the POWER to put me in a different place/world. My life as I knew it is over. I'm trying to regain my position as matriarch of my family...and it's been a long, exhausting, devastating, embarrasing, climb back. Never again will I trust BLINDLY strangers in the medical system. No one has your back. The sooner you know and absorb that fact, the better. It's a cold, cruel, GREEDY world we live in. I'm ashamed of myself for being so stupid, naive and gullible. You almost GOT me, Pfizer.