Chantix: "People Should be More Informed"

Sandra (not her real name) had been smoking for 10 years and had tried every method available to quit when she was told about Chantix. Hearing that people had some success on the drug, she decided to give it a shot. She took her first Chantix dose on October 21, 2007 and since then has experienced a wide range of side effects, including nightmares and suicidal ideation.

"I decided to quit smoking after I was diagnosed with gastro-reflux disease, which can be caused by smoking," Sandra says. "I had heard great things about Chantix so I saw a doctor to get on it. I started taking the medication and I knew that there was severe nausea and nightmares associated with it, both of which I experienced. Then I slowly started to feel fatigued and unmotivated. All I wanted to do was sleep. I asked someone if this was normal for people who quit smoking and they said 'yes,' so I thought that what I was going through was because of quitting smoking.

"However, I continued to get more and more depressed. I would put myself on the call-off list so that I could go home from work early. I was not working many hours and not getting much pay, but I didn't care about anything. I would just stay in bed and have crying spells." 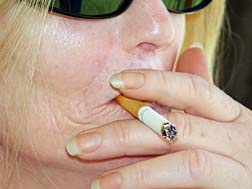 Sandra says she started to notice the depression after being on Chantix for two to three weeks. She works as a nurse, but found it harder and harder to go in for her shifts. After about a month on Chantix, Sandra stopped taking the full dose because the nightmares and nausea were too much for her.

"I had nightmares before taking Chantix, but now I was having them almost every night," Sandra says. "I had never had nightmares that graphic or that frequently before."

On December 19, 2007, Sandra stopped taking Chantix. However, her problems did not stop. She began to have suicidal thoughts.

"After two months on Chantix, the depression got really bad," Sandra says. "I stopped going out with people even though I'm social. A friend told me about the link to suicide and violent behavior so I decided to quit taking it. Within days I could not stop thinking about hurting myself. The thing is that things were going well at that point for me. I was going back to school and I had no reason to think these things. I would be in a half-sleep state and thinking that I had to get suicide notes written and thinking about hurting myself."

More News
On December 23, Sandra broke down at work. "I started crying and telling my boss that I thought about hurting myself," Sandra says. "It's like there was no filter telling me what I should and shouldn't say. I'm very emotional and not able to cope with things. I felt like I was going crazy, like there were two things always going on in my head. It was a horrible experience for me. I did not know how bad it was until I went home and looked up Chantix and suicide and read some of the other people's stories. I felt like I was reading my own words."

Sandra is slowly recovering from her experience. She notes that the suicidal ideation is gone and she does not feel depressed any more. However, she is now dealing with anxiety and panic attacks and she reports that she cries over minor things.

"I don't go in to work because I'm worried about my ability to care for my patients," Sandra says. "I was told once that in very fine print the leaflet mentions the risk of suicide and neurotic behavior, but I was never told about that risk. My frustration is that more people should be informed."