Chantix by Pfizer: Quitting Smoking Could Kill You

Trying to quit smoking is hard enough, without being driven to suicide. But that appears to be a possibility with Chantix, and its United Kingdom counterpart Champix, after reports of smoking cessation patients experiencing suicidal thoughts.

The European Medical Agency (EMEA), which is responsible for regulating medicines in 27 countries overseas, has put Champix under surveillance, and has requested that Champix maker Pfizer forward any and all safety-related data for analysis.

And in this country, the US Food and Drug Administration (FDA) revealed last month that the agency is debating the safety of Chantix after thousands of adverse effects reports. With the issue just emerging in the media, people are suddenly cognizant of Chantix warnings.

So far there are no hints at a Chantix recall. But stay tuned. 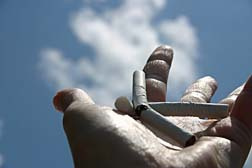 Chantix (and its UK counterpart) is the latest wonder drug to come onto the market targeting smoking cessation.

It's a huge market. According to the Centers for Disease Control and Prevention (CDCP) in Atlanta, an estimated 44.5 million adults in the US smoke, with 8.6 million suffering from some kind of disease related to their nicotine habit. In clinical trials, Chantix proved more effective than Zyban, its nearest rival.

Little wonder, then, that the FDA granted Pfizer a priority review for Chantix and its active ingredient, varenicline tartrate, before announcing approval of Chantix on May 11th of last year. Chantix arrived onto the market in August of 2006 with tremendous promise.

So much for promise.

Chantix works by targeting the receptors in the brain that release pleasureful dopamine as a response to nicotine. The Chantix active ingredient, varenicline tartrate, prevents nicotine from reaching the targeted receptors, and thereby prevents the release of nicotine-induced dopamine. The Chantix regimen involves regular ingestion of a series of pills—some white, others blue—over a prescribed twelve-week period.

The most common Chantix side effects articulated by Pfizer like a mantra are nausea, sleep disturbance (trouble sleeping, changes in dreaming), constipation, gas and vomiting. Nausea is touted as being the most common adverse effect, with a 30 per cent incidence rate. Pfizer also references the presence of other side effects—without identifying them—on the primary consumer pages of its official web site, and recommends Chantix patients consult their doctor for additional information.

It was a bit of a shock when reports started coming in of people experiencing suicidal thoughts. A popular television editor in the United Kingdom slashed his wrists just a few weeks into his 12-week relationship with the drug. In the US a promising musician without an aggressive bone in his body physically abused his girlfriend, whom he had previously described as his soul mate, before breaking into a neighbor's home and frightening the occupants. The startled homeowners shot the man dead.

Carter Albrecht, according to reports, had consumed a few alcoholic beverages and had just taken his very first dose of Chantix. Friends and family all agree that he didn't have a mean bone in his body, prior to the incident during that fateful night this past September that cost him his life.

Other reports of aggression, depression and suicidal thoughts have unfurled the red flags.

In addition to the FDA in the US and the EMEA in Europe putting the Pfizer product under the microscope, the Australian regulatory authority will require a warning when the product makes its debut next year.

Pfizer is complying with regulatory requests for safety data, and for now is defending its product as safe.

However, while continuing to promote a handful of common side effects, more complex information geared to doctors that comes with the product refers to the possibility of aggression and suicide.

And on the official Chantix web site, a page geared for healthcare professionals (but can be easily accessed by the consumer) lists a litany of adverse effects—everything from chest pain, to menstrual disorders in women. Under the heading 'Psychiatric Disorders,' hallucination and suicide ideation are identified as rare, but are a risk nonetheless. Anxiety, depression, emotional disorder, irritability and restlessness are identified as 'frequent.'

In total, there are dozens of Chantix side effects, ranging from frequent to rare, under 19 separate headings.

At the end of the page, there is reference to post-marketing reports of depressed mood, agitation, and changes in behavior, suicidal ideation and suicide. While the specific role of Chantix is not known or identified in relation to the rigors normally associated with trying to quit smoking, patients were indeed on Chantix therapy when the problems started happening.

While Chantix remains under the microscope, the stakes are high. On the market for just over a year, Chantix claims three million users in the US alone. Pfizer, understandably, will do its best to defend its product.

Meantime it will be interesting to see how the FDA responds, in view of the agency's original unbridled support of the drug a mere 18 months ago.

What a difference a year makes. In one week alone the FDA received over 5,000 complaints related to Chantix, after a television station in Dallas/Forth Worth aired a story about the drug and its potential side effects, and requested FDA records through the Freedom of Information Act.

Suicide was reported on 55 occasions—although it is not known if that number references attempts at suicide, or actual suicides, or both. Suicidal thoughts, meanwhile, were identified in 199 cases and 417 people complained of depression.
There were hundreds of references to anger, aggression, amnesia, hallucination and—horribly—homicidal thoughts.

This one is worth watching carefully.