Stephen M. says that it only took eight days after starting his prescription before he had a serious reaction to Chantix. He notes that the day he doubled his dosage he had a nervous breakdown. Following that nervous breakdown, he suffered from panic attacks, shaking hands, a sense of hopelessness and thoughts of committing suicide. He was taken to the ER because of the severity of his panic attacks and required time off work to recover.

Stephen says that the problem was not depression, but he still talked about committing suicide. "I was never depressed like people that I've read in forums, I've had more of a hopelessness," Stephen says. "It was to the point where my mother and my aunt had suggested that I check myself into a psych ward because of how much I was starting to talk about suicide." 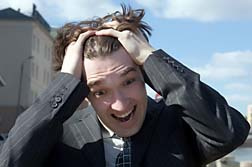 In fact, Stephen reports that at one point, he seriously considered suicide. "After a major panic attack, I had feelings of hopelessness," Stephen says. "I felt like nothing mattered anymore, so I took a gun and went into my room. Luckily, there were no bullets in the gun and my brother found me and flipped out completely. But he sat down and helped talk me through it. I thought about suicide a lot throughout the whole ordeal. I told family members that I felt suicidal and I was going to shoot myself.

"I really felt like I had lost my mind. I was definitely not in control of what I was thinking, especially when it came to the attacks. But I know for a couple of weeks I had basically laid in my bed with just my blankets up to my eyes, just freaking out in my head, not knowing what to do. It was a constant spin of irrational thoughts. I feel like I'm being a burden to my brother and not being able to cope with life is something I'm not used to. I used to be a really strong person and this has made me doubtful and weak."

Stephen says that his panic attacks started affecting his work and is hands started shaking, a problem for someone who works as a graphic designer. He had a serious panic attack at work that left him unconscious and resulted in him taking time off to try to recover, which he has started to do, slowly. "I definitely feel better than I was," Stephen says. " I still have some suicidal thoughts, but they are less frequent. Sometimes it just seeps back in, where I feel extreme hopelessness and helplessness. I need to get back to work and do things again that I used to enjoy.

More News
"Now they're starting to put [warning] labels on Chantix," Stephen says. "I feel like I was a guinea pig or something. If it had gone through the trials of drug testing, shouldn't there have been something that said, 'risk of nervous breakdowns, risk of suicidal thoughts, risk of panic disorder?' It was just supposed to help you quit smoking. I think that this was a giant mistake by the medical company. I hope it gets taken off the shelf."

More and more patients are coming forward to share their experiences with Chantix, hoping that they can warn other patients about the risks that they did not know about. Many say they had never heard that Chantix carried a risk of suicidal thoughts or acts. They are now investigating the possibility of a lawsuit against the maker of Chantix, alleging that the drug caused them to either attempt to commit suicide or have thoughts of committing suicide.