Anyone expecting the appearance of a black box warning for Chantix has an ally in Public Citizen. The advocacy group founded by Ralph Nader has jumped into the fray by demanding Chantix manufacturer Pfizer add a black box warning to its smoking cessation drug after it was found that suicidal thoughts amongst Chantix users allegedly doubled every three months throughout 2007.

The anti-smoking system, a 12-week program that diminishes cravings for nicotine by blocking targeted receptors in the brain from receiving nicotine, thereby mitigating the release of pleasure-loading dopamine, has been the subject of intense scrutiny and media attention since coming onto the market amidst much fanfare just a few short years ago. 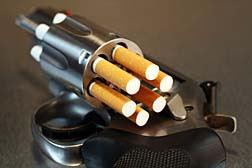 However, an alarming parade of adverse effect reports, including aggression, depression, suicidal thoughts and actual suicides, has raised the red flag. While Chantix remains on the market, the US Food and Drug Administration (FDA) is continuing to investigate, and is advising doctors to carefully monitor their Chantix patients, as well as carefully determine the suitability for patients considered candidates for Chantix.

Late in March an investigative team with the CBS 11 TV affiliate in Dallas Forth Worth crunched some numbers from publicly available data covering the first nine months of 2007, the most recent data available.

According to the report the number of adverse events linked to Chantix rose from 700 in the first three months, to 3,700 at the conclusion of the nine-month data window. What is most disturbing is the number of attempted suicides, up to 18 from zero in that same interval. The data, when broken out, demonstrates a trend that shows suicidal thoughts nearly doubling every three months throughout 2007.

Chantix, and it's UK counterpart Champix, first came onto the market in August of 2006 after completing the requisite pre-market trials which test the product on a small cross section of patients thought to be a statistical representation of the wider population. However, it has been reported that those trial participants were carefully chosen, and those individuals with serious physical, or emotional issues or conditions were weeded out.

It has also been reported that trial participants received weekly counseling sessions, something most people in the real world would either not have access to, or could ill afford.

For its' part, Public Citizen put Chantix on its 'Worst Pill List' early on, and advocated that Chantix be curbed for seven years, as it is the time, according to a Public Citizen spokesperson, that it takes for the true merits, or risks of a drug to come into view.

Sure enough, the media and the Internet have been rife with stories, and reports of Chantix users experiencing a wide range of adverse affects, some of them serious—and the most serious of all, suicide ideation.

Initially, Pfizer listed the five most common, and relatively minor side-effects on the product label, but reserved the more serious adverse effects for a product insert, produced with fine print, that was meant for doctors and medical professionals. Here, is where language articulating the potential for depression, aggression, and suicide ideation could be found.

That has since changed, as Pfizer updated the warning on the Chantix box in January.
It now warns all patients be observed for potential neuropsychiatric symptoms, including among other things, suicidal behavior.

However, Public Citizen is not satisfied. It wants the strongest warning possible—a black box warning—for a drug that has been allegedly found to be at the root of so much hurt and injury, and even death.

More News
In the 18 months since Chantix came on the market, it has been embraced by millions of Americans desperate to quit smoking. In their wake, are the scores of Americans trying to quit Chantix. If indeed, it isn't too late.

Pfizer, for its part, stated that in its view post-marketing data is inconclusive. Further, the manufacturer continues to believe in the safety, and efficacy of Chantix. Pfizer also stresses that it has worked closely with the FDA in updating product labeling, and reminds us that smoking remains the leading preventable cause of disease and premature death in the US, with more than 438,000 deaths annually, attributable to smoking.

Still, drugs promoted as helpful should not help you to the hereafter. Those having experienced injury, or the loss a loved one not to smoking, but to the effort to quit smoking via Chantix, may be well advised to seek legal counsel.