"Whatever comes of me telling this story, my main motivation is that I want to save other people from taking drugs like Celebrex," says Andrea Whittaker. "My mother was misled when it came to Celebrex. If my mom had known the warning signs, if she had been given the option, she would never have taken it." Whittaker's mother died in October, 2002.

"Although my mother, Shirley Whittaker, was 79, she was in very good health," says Whittaker. "She took Celebrex [a COX-2 selective non-steroidal anti inflammatory drug] for about two years but in three-month increments, for arthritis. In May of 2002 she had an attack of some sort—uncomfortable, like indigestion. She followed up with the doctor and he said she just needed a vacation. Mum took a while to recover but we just passed it off as arthritis or little problems that come up with age. But we did have a great summer. 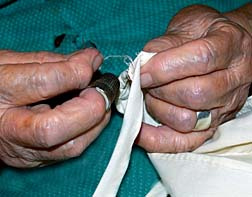 On October 1 she called and said she wasn't feeling well. I live 10 minutes away so I went over. She was having symptoms of a heart attack—she was perspiring, her heart was racing—in retrospect I should have phoned the hospital but she started to feel better. I took my dad out (he had Alzheimer's so she was also stressed about him) and came back three hours later. She was back to her normal self.

I went home and within half an hour, my mother had died. A neighbor (my dad called her) phoned and told me she had been taken to the hospital. When I got back to their house, police were there and I still didn't know that she was dead. They tried to resuscitate her at the hospital. There were no risk factors: she didn't smoke, she wasn't overweight, no family history of heart disease. Most of our family members lived into the 90s.

But she was on 400mg of Celebrex. She was taking it just before her first episode (that we didn't pinpoint) in June--I checked with the pharmacy. Then she started it again in late September. She was on it when both these episodes happened and that is what I find significant.

I am up-to-date on particular prescriptive drugs that have been taken off the market—I have been researching Celebrex on the internet. I read about Dr. Mercola in 2003; he was warning people about the dangers of Celebrex, Bextra and Vioxx back then. If I had read that sooner, I would have talked to my mom about it and she would have had the privilege to make her own choice.

She should have had the option to know the risks. If she knew, I am sure that she wouldn't have taken it. She would have handled the arthritis pain. Pfizer didn't give her that option, the option that could have saved her life.

Also, I don't think doctors should be prescribing drugs like that to people who are older. Our arteries do narrow and we live with it. But if you give an older person a drug that causes clots, that one lethal clot could make a difference. I think the drug company knew. The warning is now on the bottle but why wasn't it there for my mum?

I am angry and feel betrayed. I have accepted my mother's death but if I can save someone else's mum, I will. I think prescription drugs are too easily prescribed.

If only she had tests after that first episode. But she looked so good; she was so healthy, that she was under-treated by two doctors. I asked the doctors, if she had been given a cardiogram after that first warning, would it have made a difference? He said in all likelihood, something could have shown up. One artery was 80 percent blocked. People should ask more questions and be more careful. My mother was always helping people out—I hope a little bit of her rubbed off on me."

In a report that was issued on December 17, 2004, Pfizer stated that they had no plans to issue a Celebrex recall despite medical evidence that showed patients who took Celebrex were at an increased risk of heart problems.

Celebrex has been a big money-maker for Pfizer: the drug has brought in sales of about three billion dollars since the FDA approved it in 1999 and Celebrex has been prescribed to at least 27 million Americans.

More News
In January, 2005 a study suggested that Celebrex was potentially as dangerous as Vioxx and that it "posed a greater risk of cardiovascular events than other pain pills". Even after the study was made public, Hank McKinnel, head of Pfizer, said, "We still believe that Celebrex, when used as recommended, which does not mean 800 milligrams a day continuously for three years, is safe and effective. We've had discussions with the FDA. They haven't taken a formal position, but what they've said publicly is that physicians should be considering alternatives for treatment of arthritis and pain and that if Celebrex is the alternative they select, then it should be at the minimally effective dose, and that's good medicine."

Was Shirley Whittaker's 400mg the "minimally effective dose"? Was that "good medicine"?

Posted by
Laurie. Poirier. Flores
on September 19, 2015
Any. More articles. About. Celebrex please. Forward. My. Also. Diedbecause bod. This. Drug