A Florida facility is the focus of care center abuse allegations following reports of a lawsuit filed against it by a local advocacy group. The facility, which has already lost a care center abuse lawsuit, is accused of residential care abuse resulting in horrific injuries to patients. 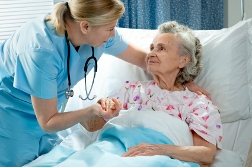 The facility at the center of the allegations is the Florida Institute of Neurologic Rehabilitation (FINR). In October, Disability Rights Florida, a local organization, filed a lawsuit against the facility, alleging staff at the center prevented an investigator from speaking with witnesses during an investigation. That investigation focused on claims that a patient was abused by staff, according to Bloomberg News, (10/3/12). Now, more allegations of abuse have been raised.

According to Tampa Bay news, (WTSP; 11/01/12), an investigation has begun into allegations that patients have been abused by FINR staff, in some cases resulting in death. One undercover tape reportedly shows two staff members elbowing a patient with brain injuries in the chest. Meanwhile another patient, who was restricted to a liquid diet, was allegedly fed solid food, which aspirated in his lungs, resulting in his death.

One patient died after he was subjected to a takedown by four staff members. His family won a $5 million wrongful death lawsuit against the facility, arguing that he was taken down violently for taking an extra snack cake. Although the man's death was ruled a homicide by a medical examiner, no criminal charges were ever filed.

The Florida Institute of Neurologic Rehabilitation is a care center to treat patients with brain injuries. In addition to the $5 million wrongful death lawsuit it lost, it currently faces a lawsuit filed by Allstate Insurance. That lawsuit alleges patients have been beaten and abused by staff and further alleges patients are forced to remain in the facility longer than necessary.

A spokesperson for the facility told WTSP that any abuses that happened at the center were the actions of individual staff members and not the result of any policies or procedures on the part of the facility.

More CARE CENTER ABUSE News
Meanwhile, a fourth lawsuit has been filed against Castlewood Treatment Center, a center for women with eating disorders. According to KMOV News (11/12/12), the lawsuits allege workers at the center planted false memories in the patients, causing them to believe they were victims of satanic abuse. The patients allege because of the false memories, they stayed at the center much longer than necessary. One patient reportedly spent $180,000 on treatment. A spokesperson for the facility denied the allegations.

One of the lawsuits alleges false memories included physical and sexual abuse, rape, and satanic ritual abuse, according to court documents. The lawsuit further claims the plaintiff incurred, "medical, counseling and therapy treatment expenses in the approximate sum of $600,000," as a direct result of the implanted memories.

Click to learn more about LawyersandSettlements.com
LawyersandSettlements.com is an online news and information site for the general public and legal community. As a legal news resource, we have emerged as an independent & trusted voice. We provide detailed and quality information on various lawsuits filed including Elder Care Cases, Malpractice Cases, and Personal Injury Cases.