Last month, Jerry Sandusky was convicted on a variety of sexual abuse charges and while his actions do not constitute care center abuse, there are lessons from the Penn State situation that can easily be translated to care center sexual abuse cases. What officials at Penn State knew or did not know, and what consequences they face for their actions—or lack of action—in light of the abuse serve as a reminder that officials at institutions are responsible for preventing abuse against vulnerable clients. 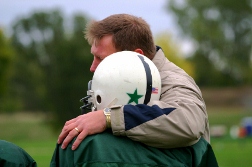 In June, Jerry Sandusky was convicted of 45 of 48 counts related to the sexual assault of 10 boys. Sandusky was once the defensive coordinator at the Penn State football program and, according to various reports, used his access to the Penn State football locker room as a means to facilitate the abuse. And now emails have come out suggesting that former Penn State President Graham Spanier and other officials knew about the abuse, but did not prevent it and did not alert the authorities, putting more boys at risk of abuse.

More CARE CENTER ABUSE News
Spanier was fired in November 2011 for his failure to alert authorities to the abuse, while famed football coach Joe Paterno—who died in January 2012—was also let go. Other former officials have been charged with perjury and failure to report the abuse. According to Newsday (6/25/12), police did investigate Sandusky in 1998 but campus police asked the investigation be stopped, and it was.

Now, Sandusky's victims are reportedly preparing to move forward with civil lawsuits against Penn State for failing to protect them from the abuse.

Officials and management at care centers and other institutions have a responsibility to report abuse to the authorities, even if that abuse is perpetrated by the institution's own employees or people otherwise linked to the organization. Failure to do so puts the center's clients and residents at risk of suffering terrible abuses and puts them in danger of serious harm and injury. It is up to care centers to ensure that their residents and clients are safe from harm or injury at the hands of staff, visitors or other residents.